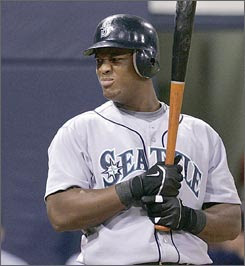 The Red Sox are just a few years removed from a World Series title, but also coming off of a humiliating sweep in the Division Series (including a heart breaking elimination in Fenway.)

In the off season they pick up a slick fielding third baseman whose power has mysteriously disappeared. And along the way jettison their previous third baseman... the one who was a huge post season hero... the one who helped deliver a World Series title.

Now am I talking about the Red Sox bringing in Adrian Beltre to replace Mike Lowell?

Or am I talking about Mike Lowell replacing Bill Mueller?

Sox fans can't and shouldn't get swept up in nostalgia.

Say what you want about Theo, but he knows when NOT to get sentimental.

The Red Sox are as cold hearted and vicious as the Yankees are underratedly sentimental.

If he was sentimental, he would have offered Nomar 5 years back in 2004... and that contract would be just coming off of the books.

If he was sentimental Pedro, Mueller, Millar, Damon and Manny would all have gigantic unmovable contracts... and the likes of Beckett, Dice-K, V-Mart and yes even Lowell wouldn't have worn the Sox uniform.

It's better to have a guy help you win the World Series and break down or get suspended on someone else's dime.

You want to see what a team looks like that has big name players but also a lot of veterans breaking down? MEET THE METS!!!

Plus Beltre is signed to a one year with an option contract... in other words "Have a monster season and you'll get a BIGGER deal next year!"

This off season for the Red Sox has been deceptively solid.

Think about the moves that have been made...
John Lackey... Mike Cameron... Adrian Beltre... Marco Scutaro...

What two things have the Red Sox improved?

That would be the pitching and defense, which I am going to go out on a limb and say is kinda sorta important.

I've seen enough Red Sox teams that can mash the ball but not pitch or catch it.

Now the Red Sox have Beckett, Lester and Lackey in the rotation... three guys who have pitched and won a World Series clincher.

Throw in Buchholz and Wakefield...

And if Dice-K comes back, it will be like acquiring a 15 game winner for nothing (except that posting fee!)

And also take a look at the fact that the big prospects and young players like Buchholz, Bowden, Ellsbury, Bard, Westmoreland, Kelly, Tazawa, Anderson, Fuentes, Rizzo and Iglesias are all still in the organization.

And with Bay skedaddling they'll still be picking in the first round.

So if Lowell gets dumped or bench, we should all salute him, then get right back to the business of rooting for the Sox and waiting to see if Beltre can be the third straight Red Sox third baseman/World Series hero.

(Never forget... I loved the Gagne deal when that happened... so this could all suck.)