Marlins sign Josh Johnson... should make it easier to trade him 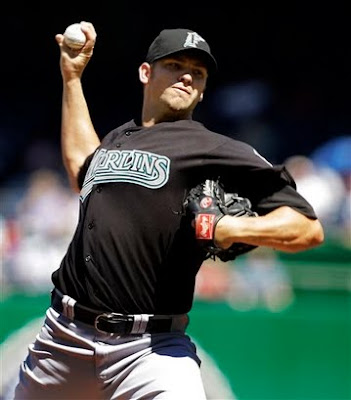 The Players Union got on the Marlins for not exactly pumping money into the franchise... and the Marlins acted like anyone caught doing something wrong: They quickly made a gesture to show they turned a new leaf... kind of like a cheating husband buying flowers and a diamond to his betrothed.

And as sure as I am sitting here typing this, they will deal him in a year. A top flight starter with 3 years left on his contract... heck they could get 2 or 3 impact players for him.

And so it goes for the Florida Marlins, the strangest team in all of sports. They have no big fan support, a low payroll and are poster children for salary cap chirpers.

Except for the fact they have won as many World Series since 1993 as the Cubs have and the Indians have and the Phillies have in over a century... and as many as the big spending Mets.

And despite cleaning house they constantly put a decent product on the field. In 5 of the last 7 seasons they've had a winning record (including a World Series winner.) And one of those two losing seasons they competed for the Wild Card deep enough into the season to make Joe Girardi manager of the year.

It isn't always how much you spend but HOW your spend.

Florida's payroll was under $36 million in 2009... in other words it was lower than what the Cubs paid for Kosuke Fukudome, Alfonso Soriano and Milton Bradley last year.

And while they play in a division with the only no doubt about it playoff team (the Phillies) the Marlins have as good a chance as anyone to win the Wild Card. Heck they won 87 games last year. One more win a month and they would have been in the dance!

And if things don't work out this year, Johnson is as good as gone and EVERYONE knows it (along with Hanley.)

The Marlins will deal him off to some team and get future All Stars in return. It's how they work!

I must say I hope the new ballpark helps build a fanbase for this surreal franchise.

They have an ace and an MVP candidate locked up for beyond the opening of Margaritaville Stadium (I just assume it will be named after a Jimmy Buffett song.)