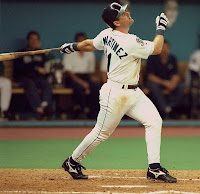 Is Edgar Martinez a Hall of Famer?

This isn't a clever question I am asking that I am confident in the answer to and will spend the rest of the blog answering.

I truly don't know the answer to it.

He sure LOOKED like a Hall of Famer while he played.

My Goodness he was such a tremendous all around hitter when he played that he could actually out shine Ken Griffey Jr. and Randy Johnson in the 1995 playoffs.

He won batting titles, led the league in on base percentage three times, was an OPS champ and had great power and run producing abilities. He had 8 exceptional years and many other good ones over his 18 year career.

And he was no doubt about it the best DH of the post strike era.

But there lies the rub... the post strike era.

There hasn't been a whiff of controversy about Edgar Martinez and his stats, so I won't go there. For all he know he's as clean as a whistle.

But the era he played in was an era where the numbers were so exaggerated that to compensate, only the biggest numbers should be considered.

All he had to do was hit. I doubt he even owned a glove after 1999. And yet in an era where players passed milestone numbers with startling and sometimes suspicious regularity, Edgar never came close.

He was a great player, but was he great long enough?

But should he be rewarded for coming through the other end of the decade without scandal? With the inevitable hand wringing that will come about when Bonds, Sosa, Ramirez, A-Rod and Clemens come on the ballot, shouldn't someone like Edgar be saluted... a guy who stayed with one team and played with heart and no trace of scandal?

It's a real quandary