I am disappointed that Mark McGwire told the truth 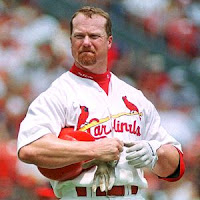 Yeah you read that right.

I prefer lying McGwire to this whole weepy “I wish I never played in the steroid era” McGwire.

Jon Heyman of SI asked a valid question when he said “if you lie for 10 years, and everyone knows you're lying, what's the value of finally telling the truth?”

Well the value was in the fact that he is in uniform again and was going to be hounded with questions about “the past” in spring training.

And oh yeah… his Hall of Fame candidacy could have a nice shot in the ass if he can start to portray himself as an honest martyr.

(Look how fast A-Rod and Andy Pettitte put their juicing behind them!) 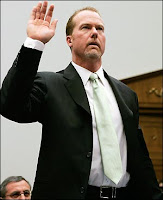 But McGwire’s chance and heroism came and went in March of 2005. Imagine if he came clean when he went to Congress. There would be some backlash, but then people would start admiring his honesty.

And when he first popped onto the ballot in 2007, two years would have come and gone and he’d have a better showing than 23.7% in the vote.

But that came and went… and if we learned anything from Pete Rose, it’s that if you lie for decades at a time, people aren’t so quick to applaud your confession when it seems to have ulterior motives.

And frankly it’s no longer fun.

It could be my fascination with con artists, but isn’t it cool to watch someone lie when you know they are lying… and everyone on the PLANET knows they are lying.

I almost admire the stones of someone who carries out a lie in the face of overwhelming evidence. 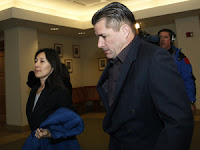 The other night Richard Heene, the Balloon Boy’s dad, was on Larry King and it was fascinating.

Then he came on Larry King, realizing that his 15 minutes of fame were long gone, and he insisted that it wasn’t a hoax and he truly thought his son was in the balloon.

And Larry kept asking “Why did you plead guilty?” “Why didn’t you press forward?” And his responses kept getting more and more incomprehensible. Yet he stuck to his guns. Cried a few times. Made no sense and lied through his teeth in front of millions of people and a grand total of zero people believed him.

He even brought a character witness to show he was telling the truth and his friend didn’t even confirm what he was saying.

Yet he pressed on.

It was good TV.

I was hoping for more of the same with Big Mac.