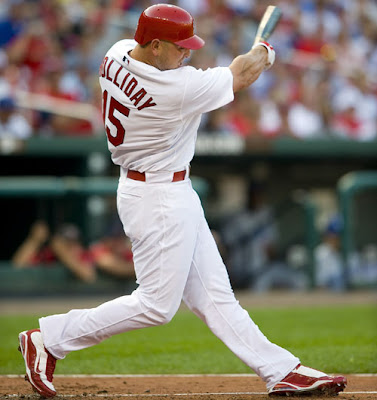 Seriously, the Cardinals are having a trying enough season already.

Adam Wainwright had the dreaded words Tommy John associated with his name. Plus he was on a plane that skidded off the runway. (Nobody was hurt, but there are bad vibes about this team.) So they lost their Cy Young contender. Not good.

The Cardinals are relying on big players who had some injuries (like Yadier Molina) or young guys who need to fix their attitude (I'm looking at YOU Colby Rasmus) or old players that will discover the fountain of youth (like Lance Berkman). And they need to have Dave Duncan work his magic on broken down pitchers. (Didn't work with Jake Westbrook yesterday.)

In other words the Cardinals were built on a shaky foundation, and that was BEFORE the poison bag inside of Matt Holliday's gut exploded. (Hey evolution, take your time phasing out the appendix!)

The Cardinals don't have a lot of wiggle room in their lineup and having Matt Holliday sit in a hospital bed doing crossword puzzles can be put in the "We Didn't Need This" file.

Without Holliday batting behind him, then why on Earth would a sane pitcher throw a strike to Albert Pujols? Yesterday David Freese was protecting Albert in the lineup. No offense to David who is a nice young player, but I would walk Albert intentionally with the bases loaded in the 9th inning of a 1 run game to face David Freese.

Holliday will be gone for at least a few weeks and the number of strikes Albert will see can be counted on your nose.

And that can't make the prospect of Albert sticking around any better.

I hate to keep harping on this, but Pujols' contract will hang over the Cardinals season the way that the Madoff situation will be the bane of the Mets existence.

OK, Pujols contract isn't a historic financial scam that ruined many people's lives. It is just the elephant in the room and will eventually be $300 million from some shmuck's checking account.

And I can't help but think that anything that makes Albert think St. Louis is the wrong place to stay will help add up to his taking the show on the road.

So I reiterate to Matt Holliday's appendix... you aren't helping.