This is what I was afraid of with the Red Sox 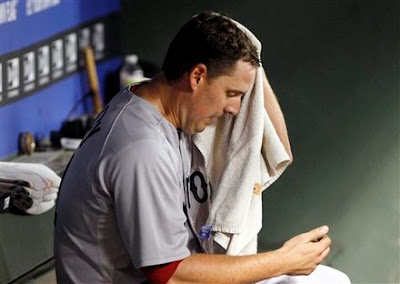 At least there was no suspense in this game.

Yeah, I know it is early. But one reason I wasn't swept up in the pre season hype was I felt like there were too many assumptions about the starting rotation. Lester and Buchholz were written in ink and the assumption was either Lackey, Beckett or Dice-K were going to be bouncing back.

Well we had better HOPE so. John Lackey became John Lacking or John Shelacky. He gave the Sox 9... sadly it was 9 earned runs against.

I would like to NOT start the season being swept, especially with and off day on Monday and Josh Beckett's potentially agonizing first start of the year on Tuesday.

I know the Red Sox will eventually win a game. I'd like to not have to wait for it.