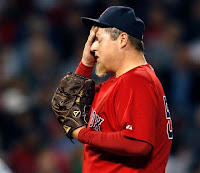 The Red Sox had a late lead. They were playing the Mariners, not exactly a team that was a preseason pennant pick for anyone.

All they needed to do was hold on to the lead and then on Saturday beat the Mariners at Fenway again. Then they would be 13-13.

I grant you that is the definition of a mediocre record after 26 games.
But with the rancid start the Red Sox had, finishing April at .500 would have been a good first step.

Instead Dice-K is hurt which could mean anything... and the White Sox are looking super smart for letting go of Bobby Jenks.

Another one run loss... now a losing record in April is clinched. And the tally must be updated.


DODGED BULLET GAMES - 5
April 8 - 9-6 win against the Yankees. (The Sox end their 6 game losing streak with a slugfest. John Lackey stinks but Phil Hughes stinks even more.)
April 10 - 4-0 win against the Yankees. (Beckett and Sabathia duel in a game that was 1-0 until the late innings.)
April 20 - 5-3 win in Oakland. (Red Sox survive a lead off homer and two bases loaded situations and facing the tying run at the plate to win their first road game.)
April 21 - 4-2 win in Anaheim. (The Red Sox stranded 15 men on base and Josh Beckett's went 8 strong with no decision. But the Sox rallied in the 11th to win.)
April 22 - 4-3 win in Anaheim. (Peter Bourjos makes a 2 run errors and the Red Sox survive a bizarre passed ball by Jarrod Saltalamacchia that let a run scored from second.)

TEETH GRINDER GAMES - 9
April 1 - 9-5 loss in Texas. (The Sox tie Opening Day in the 8th with an Ortiz homer only to have Bard implode and the Sox let up 4 in the bottom of the 8th.)
April 5 - 3-1 loss in Cleveland. (The Sox drop their 4th straight as the bats are dead in Cleveland.)
April 7 - 1-0 loss in Cleveland. (Sox blow a great Lester performance on a squeeze bunt and Darnell McDonald overrunning the bag to end the game.)
April 12 - 3-2 loss to Tampa Bay. (A solid Lester performance is wasted as Kyle Farnsworth of all people shuts down the Sox.)
April 15 - 7-6 loss to Toronto. (Bobby Jenks implodes with a 4 run seventh inning as the Red Sox waste Pedroia and Youkilis homers and a clutch RBI double by Scuatro.
April 19 - 5-0 loss in Oakland. (Pedroia gets picke doff, the Sox bats go dead and waste a solid Lackey start.)
April 26 - 4-1 loss in Baltimore. (Buchholz pitches tentatively and the Sox let Kevin Gregg of all people to close out the 9th.)
April 27 - 5-4 loss in Baltimore. (The Sox tie the game with a 3 run 8th only to have Bard lose it in the bottom of the 8th.)
April 29 - 5-4 loss to Mariners. (Bobby Jenks blows a 7th inning lead, wasting 2 Mike Cameron homers.)

Can we PLEASE end this awful month?