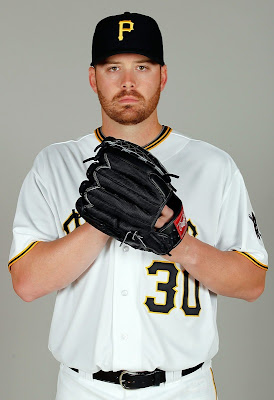 I am guessing not a lot of you watched the Pirates - Rockies game last night. PNC Park wasn't exactly standing room only and the two teams are not the most popular in the bigs.

21 Rockies played. 20 Pirates played. With 41 players putting this game on the Baseball Reference page, I am frankly surprised that the Pirates didn't have the Parrot warming up.

While you may not have seen the game, it is worth a salute. Not because it will affect the pennant race or be in the next Ken Burns entry.

But the Pirates bullpen was pressed into service early as Ross Ohlendorf lasted only 2 2/3 innings.

The likes of Troy Tulowitzki and Carlos Gonzalez were in the lineup. So was Jason Giambi who homered off of Ohlendorf.

None of those pitchers are on anyone's short list for Cy Young contenders. And yet they did their job big time. In fact, according to Bucs Insider, it was the longest shutout bullpen outing since 1900.

How long ago was that?
There was no American League yet when that happened.

Karstens pitched 3 1/3 innings starting in the 3rd. But I am making a special salute to Resop.
He came into the game in the 10th inning and looked shaky. He let up a double and a wild pitch and had the bases loaded. But he wiggled out by getting out Ty Wigginton.

He pitched a scoreless 11th and 12th inning, giving the Pirates 3 shutout innings AFTER the ninth.

But he has earned a salute here for a terrific effort.

If Pirates players like Chris Resop just do their job like they did last night, the Pirates may win a few more games.

Good job Chris Resop and the pen.
Now do that 77 more times.