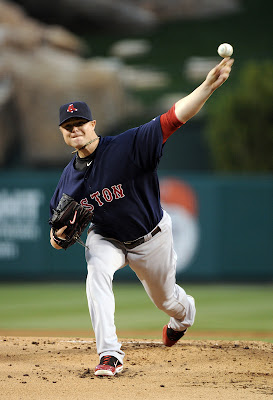 OK, there were a lot of things that were odd and could have cost the Red Sox the game. Lester was great but only lasted 6 innings. Saltalamacchia couldn't find a baseball in a little league play that cost the Red Sox a run. Hey Jarrod, it's BEHIND YOU!

The Sox won, and no matter how low Carl Crawford's average plummets, that's all that matters. Inching closer to .500... and oh yeah Dan Haren lost at the Red Sox hand.

That is awesome. The hats with the Sox on it are lame.
My wife thinks they look like booties... and that's all you need to know.


DODGED BULLET GAMES - 5
April 8 - 9-6 win against the Yankees. (The Sox end their 6 game losing streak with a slugfest. John Lackey stinks but Phil Hughes stinks even more.)
April 10 - 4-0 win against the Yankees. (Beckett and Sabathia duel in a game that was 1-0 until the late innings.)
April 20 - 5-3 win in Oakland. (Red Sox survive a lead off homer and two bases loaded situations and facing the tying run at the plate to win their first road game.)
April 21 - 4-2 win in Anaheim. (The Red Sox stranded 15 men on base and Josh Beckett's went 8 strong with no decision. But the Sox rallied in the 11th to win.)
April 22 - 4-3 win in Anaheim. (Peter Bourjos makes a 2 run errors and the Red Sox survive a bizarre passed ball by Jarrod Saltalamacchia that let a run scored from second.)

TEETH GRINDER GAMES - 6
April 1 - 9-5 loss in Texas. (The Sox tie Opening Day in the 8th with an Ortiz homer only to have Bard implode and the Sox let up 4 in the bottom of the 8th.)
April 5 - 3-1 loss in Cleveland. (The Sox drop their 4th straight as the bats are dead in Cleveland.)
April 7 - 1-0 loss in Cleveland. (Sox blow a great Lester performance on a squeeze bunt and Darnell McDonald overrunning the bag to end the game.)
April 12 - 3-2 loss to Tampa Bay. (A solid Lester performance is wasted as Kyle Farnsworth of all people shuts down the Sox.)
April 15 - 7-6 loss to Toronto. (Bobby Jenks implodes with a 4 run seventh inning as the Red Sox waste Pedroia and Youkilis homers and a clutch RBI double by Scuatro.
April 19 - 5-0 loss in Oakland. (Pedroia gets picke doff, the Sox bats go dead and waste a solid Lackey start.)

Think about that. After the rotten start, they are nearing .500 and have only one more teeth grinder loss than dodged bullet wins.

But those hats still suck.