I say good for K-Rod 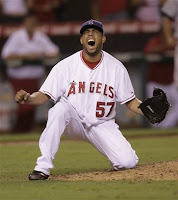 I know it is popular to belittle the save statistic, especially since Tony LaRussa and Dave Duncan destroyed the concept of a 2 inning save when they turned Eckersley into a 1 inning pitcher.

And yeah, it is possible for a choke artist to pile up saves and have the stats but not the guts of an All Star.

And that facing the bottom of the order with a 3 run lead in the 9th probably shouldn't be called a "save situation."

And I also know that Frankie Rodriguez's hits and walks are up and his strike outs are down, so you can argue this isn't his best season.

But hey!
If saves are so easy to get, then why didn't Mariano Rivera, Trevor Hoffman, Randy Myers, Jonathan Papelbon et al saved 58 games in a season?

And was he supposed to do in those 58 instances where he pitched with a 3 run or fewer lead in the 9th inning?

He's not the best in the game, but he deserves his day in the sun.

(But remember who is writing this blog... and before anyone thinks he is infallible, enjoy Manny Ramirez's walk off shot against Rodriguez in last year's division series.)