In 1987, my family moved from the suburbs of Boston to the San Francisco Bay Area. I was still reeling from the 1986 World Series and wondered if maybe I should adopt the Giants as my new team. After all the Red Sox had just treated me so cruely.

Then I saw the Giants blow the 1987 NLCS and I thought "Oh boy, this looks a little too familiar! I might as well stick with the Red Sox."

Giants fans, your team is cursed. There's no getting around it.
Like the way by Red Sox and the White Sox were... like the Cubs hope to lick this year...like Cleveland still suffers... the Giants have almost all the symptoms of being cursed.

1. A long wait for a Championship
We all know about the 86 year wait for my boys, the 88 years for the White Sox and the Cubs are now at year 100. It's 60 years and counting in Cleveland.

2. A Geographical Inferiority Complex
Chicago is called The Second City... think there's some insecurity there? Nah. Boston looks at New York with jealousy/disgust. Cleveland is... well it's Cleveland.


5. A completely irrational explanation for the lack of Championships coupled with insane behavior.
Let's start diving for pianos! Let's offer a prayer to a goat! Let's build a ballpark in a cornfield and hope Shoeless Joe comes back!


Let's see how the Giants line up.

The Long Wait?
It's been 54 years since the Giants have won. Notice I didn't say "The San Francisco Giants" because they've never won in San Francisco.

The inferiority complex
Northern California has a strange "anti Southern California" vibe. I am sure the Dodgers winning 5 World Series and the Giants losing to the Angels doesn't help it.

The Original Sin?
Well they won the 1954 World Series as the New York Giants. They moved and haven't won since... so I bet it has something to do with the move.

The Close Calls
When you break down the Giants close calls, it makes even a seasoned Red Sox fan squirm a little:

- One of the greatest team of all time with 5 Hall of Famers (Mays, Cepeda, McCovey, Perry and Marichal) and many more All Stars (Jim Ray Hart, Jim Davenport, the Alou brothers, Jack Sanford) led to a slew of 90 win seasons, no more trips to the World Series after 1962 and lots of second place finishes to the Dodgers.


- The 1987 Giants take a 3 games to 2 lead in the NLCS back to St. Louis but get shut out in games 6 and 7. Candy Maldonado loses Tony Pena's flyball in the lights setting up the only run in game 6. 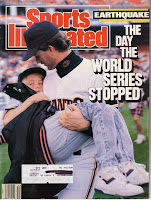 - The Loma Prieta Earthquake hits San Francisco just before Game 3. Along with the trauma and damage of the quake... it also allowed the A's to start Dave Stewart and Mike Moore in games 3 and 4. The A's sweep the Giants... the only cursed team to have an act of God prevent them from winning.

- The 1993 Giants won 103 games. Unfortunately the Atlanta Braves won 104 games... and for reasons never adequately explained to me, Atlanta was in the WESTERN division. With no Wild Card, the 103 win Giants failed to make the playoffs. The next year Atlanta was moved to the East and the Wild Card was formed... a year too late for a team that matched the win total of the 1962 Giants.

- The Marlins got walk off hits in the first two games of the 1997 Division Series. Edgar Renteria hit a 2 out RBI single to win game 1. Game 2 was won my Moises Alou's single. There's something not right about an Alou stifling the Giants.

- The Giants have a 7-0 lead against the Rockies on the last day of the season. A victory would clinch the Wild Card. The Rockies tie the game and win in on a walk off homer by Neifi Perez. The Giants would then lose a 1 game playoff to the Cubs. 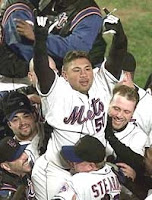 extra inning games to the Mets in the 2000 Division Series, including a 13th inning walk off homer by Mets fourth outfielder Benny Agbayani.

The Giants storm into the World Series and take a 3-2 lead back to Anaheim. The Giants took a 5-0 lead in game 6 and a home run by Bonds seemed to be the icing on the cake.

Dusty took Russ Ortiz out and handed him the game ball as if it was a done deal.
Scott Speizio fouled off what seemed to be 1,000 pitches before hitting a 2 out 2 strike 3 run homer to bring the Angels back in the game.

Glaus would drive in the tying and go ahead runs and force game 7.

And then game 7.
Try mentioning the name Livan Hernandez around my dad.

- In the 2003 Division Series, the Giants were ready to take a 2-1 lead on the Marlins when sure fielding Jose Cruz dropped Jeff Conine's fly ball setting up a game winning rally, highlighted by Pudge Rodriguez's 2 out 2 strike 2 run walk off single. The next day, Jeffrey Hammonds hit a 2 out single that looked like it was going to tie the game. Instead J. T. Snow was thrown out at the plate and the series was over.

- In 2004 the Giants needed to win the last 2 games of the season against the Dodgers to force a 1 game playoff. The second to last day of the year, they took a 3-0 lead to the 9th but the bullpen imploded as Steve Finley ended the game and the Giants hopes with a walk off Grand slam to win the division.

- Barry Bonds breaks Hank Aaron's home run record, but the specter of steroids and BALCO make it as fun as No Country For Old Men.

And it calls for irrational behavior!
I say the Giants are cursed and here's the various curses they may or may not have. 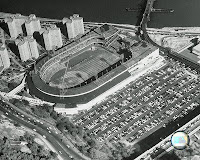 CURSE ONE
The Curse of Coogan's Bluff –

Solution:
Hold spring training at the spot of the old Polo Grounds. Granted it is an apartment complex now with no room to play ball... but do you want this World Series or not? Play stick ball, the way Willie used to! Do you agree, Michael New?

CURSE TWO
The Curse of of Eddie Grant –

The former New York Giant who was killed in World War I had a plaque in the Polo Grounds in his memory.

When the Polo Grounds were torn down, the plaque was lost. Despite former Giants owner Horace Stoneham's promise to honor Grant in San Francisco, no new plaque has been made. And no World Series titles either.

Solution:
GET A PLAQUE! Put it anywhere in AT&T Park. Stick it next to Orlando Cepeda's BBQ. Put it on the walk way. For God's sake the Giants have a statue of a seal outside. If they can honor a seal you can honor a ball player who gave his life to our country. I think everyone at McCovey Chronicles can agree with me on that.


CURSE THREE
The Curse of Minneapolis

The Giants had an agreement to move to Minneapolis but then backed out and decided to go to San Francisco. Perhaps spurning that city caused a curse to befall on the Giants. Besides, when the Senators wound up moving to Minnesota, they won the World Series in 1987 and 1991.

I think any reparations needed towards the state of Minnesota was satisfied when the Giants traded Joe Nathan, Francisco Liriano and Boof Bonser for A. J. Pierzynski.

The Giants first home and the home of San Francisco Seals for generations has long been torn down and forgotten. It's now a Safeway and shopping center near my old office at KQED TV in San Francisco.

And you walk around there and there is not a single memento or plaque honoring the great history at that place. The only sign of baseball I saw there was a DODGERS pennant in the local bagel place.

Hey Giants... How about spending some of that money you pocketed during the Bonds home run chase and carve a little plaque up. Maybe open a Giants Dugout Store. If nothing else encourage a Giants fan to sit outside the Safeway and tell people Willie Mays played here. I nominate the writers of Giants Today. 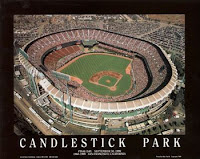 The Giants owners looked around the city of San Francisco and the must have asked "Where would the worst place for a ballpark be in this city?"
And a city official said "There's a place on Candlestick Point where the wind kicks off the Pacific Ocean, across the Bay and smack against a bluff. In the middle of August you need a parka!"
"Hmmm... sounds horrible. How hard is it to get to?"
"A single road goes in and out. It will be a jammed artery with the smallest crowds."
"Great! When can we break ground?"
And for 40 seasons Giant fans sat in that Monstrosity ... without a World Series title.

Maybe there isn't a way to payback the Giants fans for 4 decades sitting in that rotten park. Maybe it will take 40 years in Pac Bell, or AT&T, or whatever the hell it is called. That would mean a title in 2040...

Hmmm... 86 years between World Series titles?
Why does that sound familiar?