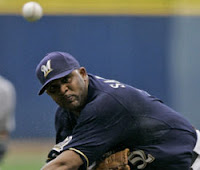 We'll call it the CC Sabathia rule.
The Official Scorer has to make sure the first hit of any game is not a judgement call.

Now normally this would be a complete non issue. Most games have a sharp hit or a grounder with eyes in the first couple of innings.

But if in those first few innings the only hit you got is a questionable judgement call... here's the rule: You call it an error.

If there has been no hits by a team and they even have to ASK if it was a hit, call it an error.

But I don't want to have a situation like what happened this weekend with CC Sabathia to happen again.

He fumbles a play in the 5th inning, the Pirate's scorekeeper calls it a hit... and that's the only hit they got.

And eeeeevvvvveryone was in a tizzy.
John Kruk said it should count as a no hitter.

But that's absurd. You pitch differently with a no hitter than you would with a 1 hitter. (I'm guessing that of course... I never even pitched a no hitter playing Hard Ball.)

You can't go back and make it a no hitter any more than the Cardinals can put the 1985 team back on the field and call Jorge Orta out.

But that one simple rule would change everything.

If it is questionable, call it an error until the first clean hit.
Most of the times, this rule would come and go without notice as most pitchers stink and will let up a hit sooner rather than later.

It's kind of like at rule in Hearts where you can't drop the Queen or any hearts on the first trick.

Now of course this would cause a problem if a guy is looking for their 3,000 hit or trying to win a batting crown, but I'm sure they'd want to win in on a clean hit too.

Either way, I think preserving a no hitter is more exciting than recreating the plot for Mr. 3,000. (Also about a Brewer.)