Is it possible I don't know a single Rangers fan?

I've tried to write a post for every single major league team this year and talk to their fan base.

And I was having trouble writing one for the Texas Rangers.
Last year I wrote a post about how the Rangers history could have been changed if they acquired a decent closer.

Once again the Rangers have a legit MVP candidate, this time with Josh Hamilton, and still the team never caught my attention this year. I never uttered the phrase "Here's the thing I find interesting about the Rangers..."

And here we are, the eve of the season ending, and I am basically writing a Rangers entry on the bus ride to school.

So I thought "What do the Rangers fans I know think?"

And it hit me...
I don't know ANY Rangers fans!

And I thought about is some more...
I've met fans of every fan base.

I grew up among Red Sox fans.

My dad is a Giants fan.
There are Mets, Phillies, Cubs, Royals and yes Rockies fans in my family.
One of my best friends in elementary school was a Brewers fan.
I went to high school with Giants and A's fans.
There was a Twins fans in my class and one of my teachers was a Cardinals fan.
I lived in New York for 15 years and knew my share of Yankees and Mets fans.
One of my good friends in college was a rabid Blue Jays fan.
Another one was a crazed Orioles fan.
I knew Indians fans in college and worked with a rabid Cubs hating White Sox fan right after college.

I've met angry Tiger fans and apathetic Braves fans.
I've met optimistic Reds fans and a few Diamondback fans gloating over 2001.
My wife is related to a few Mariners fans and one of her good friends is a rabid Astros fan.
Working in Florida I met faithful Marlins fans and even a few Devil Rays fans who wore their hats proudly 3 or 4 years ago.

Now in LA I work with many Dodger fans, Angels fans and even a smattering of Padres fans.

I even used to work closely with a guy who was an Expos fan... which will cross the Nationals off of my list.

But never a Rangers fan.
Oh I've met a few Dallas Sports fans.
But they all wanted to talk about the Cowboys.

I asked one "Do you follow the Rangers?"
He responded "Yeah I guess... is Nolan Ryan still pitching for them?" 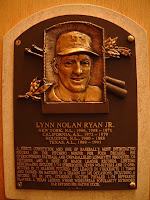 That was in 1999. Nolan Ryan retired in 1993. He was elected to the Hall of Fame that year. Meanwhile the Rangers were on the verge of back to back AL West titles.

It's a franchise that's been around as long as I am alive, has had 6 MVPs and a parade of colorful and memorable managers... and I have yet to bump into by chance a single fan of this team.

Sure there are Rangers fans at Lone Star Ball... but do you feel alone too?

How about it Ranger Rundown? Is there any buzz about the Rangers or is it an after thought for people waiting for the Cowboys season to start?

The name Texas Rangers implies it is the whole state's team. Is there any love for the team away from the Dallas area, Austin and John?

Hey Grant at Rangers Trade! What's your favorite player in Rangers history? Is it an obscure one, like Oddibe McDowell or Pete O'Brien?

Did the way he ran the Rangers keep you from voting for W, Hanks Homies?

Here's the real question... what would Dallas rather see: A Rangers World Series victory or a single Cowboys playoff victory? Can you answer that Joe at Rangers Fan?

Either way, if some of you Rangers fans have moved away from Dallas... please make yourself known!

I'd love to meet you.