The 20 biggest games for the Pirates in 19 years 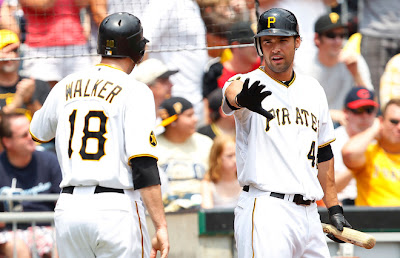 During the All Star break it was standard to look at the Pirates and say "they are a nice story but they will fade in the second half."

Well as we wake up this Friday, the second to last weekend of July and with August just around the corner, the Pirates are still tied for first place.

Cincinnati takes on the Braves while the Brewers head off to San Francisco.

All three series are competitive but the Pirates being at home and throwing Maholm, Correia and Morton means they have a good shot at winning this series.

If they can survive this weekend and stay at least tied for first, then things will REALLY get interesting.

They head to Atlanta and Philadelphia and play 2 of the three teams that I think have the best shot of winning the World Series and they'll do it on their turf.

The other of the three potential World Series teams are the Giants. They play them the second week of August.

It's a gauntlet and the next few weeks they won't have a day off until August 11th.
That's a 20 game stretch.

If they can hold their own and go 10-10 or better in that time frame, then this might indeed be a contender.

If not, well then go for the 83 wins and go for the winning season.
Pirates had the day off yesterday. The 20 game stretch to redeem 18 years of losing begins.... NOW!