Only blithering idiots are against instant replay 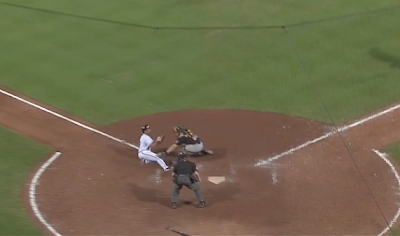 If you are offended by the title of this post, keep 2 things in mind:

A wonderful game was planight between Pittsburgh and Atlanta.
19 innings.
Both teams left their guts on the field.
Both teams played like champions.
And the Pirates, playing the most critical stretch of games that they have played since 1992, were wiggling out of jams left and right.

Is THAT what we are going to talk about?
No.

The topic will be home plate umpire Jerry Meals blew a call at home plate to end the game.
It happens.
It's 19 innings into the game. Mistakes happen.

But less than 1 minute after the call was blown, the replay clearly showed the tag was made and the runner was out.

The game went on for more than 6 hours. Are you telling me you can't spend 1 minute to make sure it isn't ended on a mistake?

Are you people who stupidly are against Instant Replay going to say this ending was good for baseball?

Where is the HUMAN element of Daniel McCutchen pitching his brains out but being charged with a loss because an umpire made a mistake?

Where is the HUMAN element of giving the Pirates the loss when they just made a terrific play to possibly end ANOTHER game ending rally?

You've got nothing, opponents of instant replay. NOTHING.
You sound insane.

I'm sure on many other topics you know your stuff.
Give up this argument.