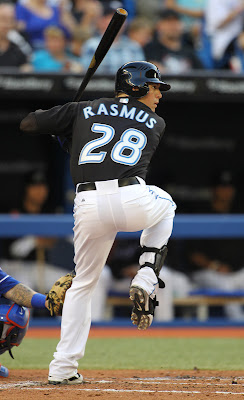 You got your wish, Colby Rasmus.
You were removed from the baseball purgatory that is St. Louis... from the blockhead manager that is probably going to the Hall of Fame... and a situation where you could make the playoffs for the second time in your three year career.

It must be a relief.
Now he can show the world what Tony LaRussa couldn't see.
And what evidently his supporters already see.
And the people who think the Blue Jays are stealing a star.

I am no LaRussa fan, but I have a hard time seeing how a guy with a decent season under his belt and lots of potential (you know, like Alex Ochoa) could be the focus of so much hand wringing.

I know he's young.
So were every bust in baseball history.

He remains hitless as a Blue Jay. But it is his FUTURE that everyone craves.

The strange thing about the future... sometimes it doesn't unfold the way you want.

And maybe if Rasmus struggles in an empty Rogers Centre for non contending Blue Jays teams, he might pine for the days when he played in a great baseball city along side future Hall of Famers with one of the great managers of all time.

But maybe I am wrong.
And if I am wrong, I will eat crow.

I need more than projections and potential. He needs to actually become a star.