I am keeping my eye on Tommy Hunter 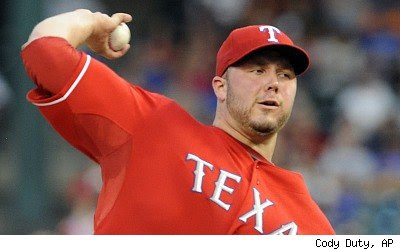 A year ago, Tommy Hunter looked like he was exactly what every team wanted. A young pitcher who could win. In fact he had the best winning percentage in the American League. At age 23 he won 13 games, pitched to a solid 3.73 ERA in Texas and had an ERA+ of 120, which I understand is good.

He made three post season starts and while he didn't exactly shine in the October spot light, he got his initial butterflies out.

Cut to a year later, and injuries and the rise of Matt Harrison has made him expendable and he has been shipped off to Baltimore for 36 year old Koji Uehara.

I'm going to watch Tommy Hunter carefully as he goes to the Orioles. There is no way Uehara will be part of any playoff team in Baltimore.

But I wonder what Hunter will be at Camden Yards. Will he be yet another toss in, a young player traded away at the deadline never to be seen again.

Sure he started in the post season.
Big deal. So did Dana Kiecker.

But what if the Orioles got a steal. A nice valuable piece to an elusive playoff puzzle.

What if Hunter comes back and becomes a nice #3 or #4 starter like he was last year? What if that happens and some combination of Zach Britton, Jake Arrieta, Chris Tillman, Brian Matusz and Dan Klein break through and become successful?

Then he might become a valuable cog in a surprising young pitching staff.
Hell, he has ALREADY been on a staff like that. Maybe that's what his role would be. The guy to remind them "Hey! Nobody thought WE'D be a good staff. But we wound up playing in a little thing called the World Series."

It's an interesting deal.
It could amount to nothing... but I have my eye on him.