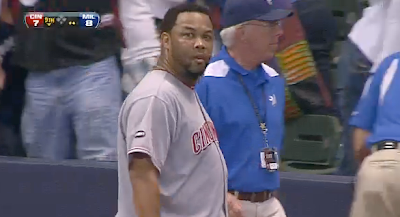 Dusty Baker, I told you to put Aroldis Chapman in the closer role LAST YEAR!.
Hell, I said it THIS WEEK!

But no. You keep dragging Francisco Cordero out there. And now look at what is happening.

Cordero was trusted with a 2 run lead in the 9th. He had the lead with 2 outs in the bottom of the 9th.

And Mark Kotsay won it for the Brewers.

What would have happened if the REDS had won?
Oh not much, except a three way tie at the top of the Division!

The Pirates, Cardinals and Brewers would have been all tied with two games before the All Star break.

And the Reds would have been only 3 games back.

It would be beautiful chaos.
And instead it is just Milwaukee with a one game lead.