I never really knew much about Captain America growing up. I was more of a DC Comic reader growing up.

So when I saw the preview for the movie that opened this weekend (and made more money that I could make in 10 lifetimes) two things struck me as odd about it.

First of all, what the hell was Paramount thinking NOT releasing this on 4th of July weekend?

Secondly, didn't Steve Rogers' transformation from a weakling to Captain America ring a bell with you?

A kid has tremendous heart and desire, but doesn't have the physical abilities to succeed... or at least keep up with the competition.

So in order to keep up and beat the competition, he is pumped with all sorts of unusual chemicals that transforms his body and BANG! He's a hero! He's the best! Everyone wants to be him!

Replace Dr. Abraham Erskine and his Super Sodier Serum with Victor Conte and "The Cream and the Clear."

Switch out Steve Rogers with Jason Giambi wandering into the A's clubhouse in 1995 meeting his new teammate Mark McGwire and in 1997 teaming up with Jose Canseco.

A few trips to BALCO later, he went from a lean first baseman to a professional wrestler! 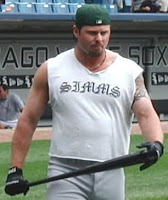 It's the same damn story!
Granted, Captain America was taking out Nazis, so there's no loss of honor pumping your body up for THAT goal.

But still, are you trying to tell me that Stark Industries couldn't have made some quality post war bucks bulking up some big leaguers?

Here we are trying to get the whole steroid era behind us... and we have some awful Hall of Fame controversy on the horizon, the Bonds and Clemens trials this year... and now Hollywood is making juicing COOL again?

It's a bad lesson for kids.

Kids should know that if you want to turn your body unexpectedly into a muscular frame, you should do it more honestly!

You know like being bitten by a radioactive spider or getting hit with a ton of gamma rays!