I have nothing against Brad Mills but... 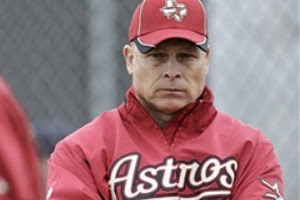 The All Star break can be very cruel for slumping managers. It is a natural transition time and a point where if a change has to be made, it will be as smooth as it can be.

Which brings us to Brad Mills.
It is NOT his fault that the Astros suck, but MAN they are a big ole pile of suck.
Their pitching sucks, their bullpen is Godawful and I hate to say it, but they may have to deal Hunter Pence and Michael Bourn. They might be the only chips that have any value. If they can flip two players for a pair of players each, they might have four players to build from.
Either way, the Astros are the worst team in baseball.
They look like they have a clear run at the #1 pick over all in next June's draft.
And oh yeah. They have a new owner coming in.
All of these point to Brad Mills having to get his resume ready.
I am not saying he's not a good baseball mind. He clearly is with his time on Terry Francona's coaching staff.
I am not saying he isn't a potentially good manager.
And I am not blaming him for the current state of the Astros.
All I am saying is when the worst team in baseball enters the All Star break knowing that new owners are on their way, it is a rotten chain of events for the current manager.
The current ownership gets to show the fans that they are still trying and the new ownership would have no issues dumping an interim manager.
If he had a long track record, then he might be safe. But it is easier to dump someone with only a year and a half on their resume.
What I'll say is this: Brad Mills will probably get axed and will eventually get another managing gig. (If Jim Riggleman and his nondescript resume was good to get hired over and over again, then Brad Mills will do fine.)
And one more thing.

Astros bench coach Al Pedrique might be getting a new gig!
When a manager gets canned, they usually take a look at the bench coach to take over temporarily. Bittersweet but good news for Al!
And guess what? He has managerial experience. When the Diamondbacks dumped (unfairly in my view) Bob Brenly, Pedrique managed the team the rest of the way in 2004.
He wasn't exactly John McGraw. He went 22-61 in those 83 games, but hey! He wasn't dealing with a great team either.