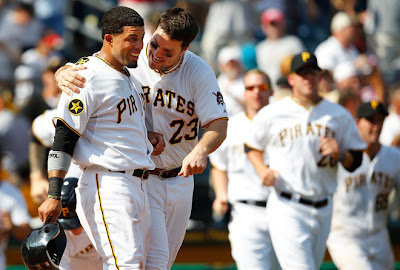 When I saw the Pirates were losing AGAIN today, I was all ready to take them to the woodshed. I was going to trash them for letting themselves get swept at home and allowing the naysayers to be right.

Then lo and behold, a comeback and a 10th inning rally later (along with the Brewers loss to the Giants) and they finished the weekend still tied for first place.

It wasn't the best start to the 20 game stretch to define the season... but the more days they spend in first, the better.

Now will someone explain to me why they pitched to Chase d'Arnaud instead of walking him, forcing the Pirates to bring in a pinch hitter and setting up a potential inning ending double play?

I'm not saying I'm smarter than Tony LaRussa... but the logic of that escaped me.

Well, you are still tied for first place Pirates.
Go to Atlanta. And don't want video from the 1991 nor 1992 NLCS.