What if Hideki Irabu had signed with the Padres? 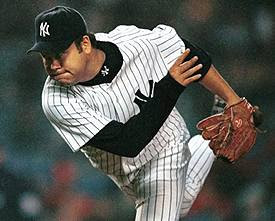 Hideki Irabu, one of the fastest throwers in Japanese baseball history and his leagues greatest strikeout artist, died today in Los Angeles County. The first reports say it looks like a suicide.
For a pitcher who has been the butt of many jokes and a Frank Costanza rant, there suddenly is nothing funny about him. Like Donnie Moore before him, a player who was a source of ridicule suddenly became a tragic figure.
In 1997 he was brought to New York as a newly minted millionaire potential hero and given the key to city by Rudy Guiliani and a spot in the defending World Champion Yankees' rotation. 11 years later his credit card was declined in a bar in Japan and he got into a brawl.
And today, trying to find work in an independent minor league, he was found dead.
Sitting at my dining room table, I can't sit and pretend to know all of Irabu's demons. Clearly anyone who could go through with ending their own life has plenty. But it is impossible to avoid the thought that failing on such a grand scale in New York may have contributed to his downfall. Joe Torre had him on the roster for the 1998 and 1999 post season but used him in a single game over 6 series. He pitched in mop up duty for Roger Clemens' dreadful Game 3 start in the 1999 ALCS.
I remember being startled when he came out of the bullpen against the Red Sox that day. I forgot he was even on the team.
He became a symbol of a Steinbrenner move to make a backpage splash and tap into the Japanese market instead of improving the team. (Of course if he delivered, Steinbrenner would have taken the credit of being forward thinking.)
And his debut in 1997 was a solid win where he pitched into the 7th. And remember in 1998, he started off as a very effective pitcher. He was the AL Pitcher of the Month for May, 1998. By mid June of 1998, he was 6-1 with a 1.59 ERA and was a big contributor to the Yankees stellar first half. As late as July 20th he had a terrific record (9-3) and a very good ERA (2.86.) A string of 6 bad starts, plus the emergence of El Duque Hernandez, pushed him out of the post season roster.
But his 1998 could hardly be called a total failure. But 1999 was not a good year for him and by 2000 he was an Expo. By 2002 he was a Ranger, his last season in the majors. He pitched in 2009 for the Long Beach Armada of the Golden Baseball League. Former Padres shortstop Garry Templeton was his manager. His teammate was Jose Lima, who passed away last spring.
I can't help but wonder what would have happened if he played in a smaller market.
The Padres paid the posting fee for Irabu to bring him to America and they owned his signing rights. But, wanting to be on the biggest stage (and have the greatest marketability) he refused to sign with San Diego. He and his agent engineered the trade that sent him to the Bronx.
Had he stayed with the Padres, his fame would not have been as great, but neither would the magnification of his failures. Like the Yankees, the 1997 Padres were coming off a post season berth and had talent.
If he had put up the same numbers with the 1998 Padres as he did with the 1998 Yankees, he would have been beloved by the fans instead of being cursed out.
Remember the '98 Padres were a terrific team that went on to win the National League pennant. They were not as good as the historic 1998 Yankees, but they had a deep lineup and a tough bullpen.
And their fan base is forgiving. Playing for a large passionate fanbase has its disadvantages. Not being able to hide any flaws is one of them. Trevor Hoffman had many high profile critical game blown saves in his career with the Padres. Had he blown those games in New York, Philadelphia or Boston, he would have been run out of town on a rail. In San Diego they are retiring his number.
I wonder if Irabu had pitched in San Diego, if he would have been able to develop and adapt to America better than in New York, where he was expected to be the next Nolan Ryan right out of the gate.
I wonder if Padres fans could have accepted him for what he was instead of tormenting him for what he wasn't. 13 wins and an OK 4.06 ERA mixed in with a pitcher of the month award would get a lot more respect in a smaller market gunning for their second ever pennant.
Maybe he pitches well along side Kevin Brown, Andy Ashby, Sterling Hitchcock and Joey Hamilton. Maybe he fares well against the Yankees in the World Series.
Or maybe his demons were just too strong to conquer. Maybe this has nothing to do with bis baseball career.
But seeing how far he fell makes it impossible to wonder. Did he have to perch himself up so high?