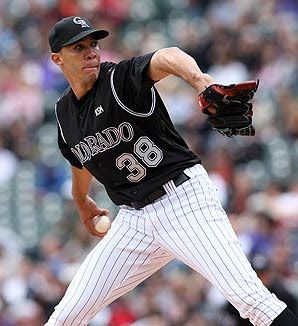 At one point last year, Ubaldo Jimenez looked like he could win 30 games. 25 was a lock.
He was the 26 year old home grown ace of the Rockies and things were just going to get better.

His numbers were solid and Cy Young worthy. But there was something mildly disturbing.

His whole career he's been a decent pitcher who put up decent numbers. And for one half of a year, he was a Cy Young candidate.

What if that one half of a season was a fluke?
What if it was an anomaly?

What if this is... *GASP*... Javier Vazquez all over again?
As I wrote before, Vazquez had a terrific 2001 with Montreal and coasted on the reputation of that season until 2009 when he had another great year for Atlanta.

The Yankees were of course burned when they brought him back... but my point is this:

Jimenez might not be an ace. But teams might THINK he is!
He started the 2010 All Star Game. That was almost exactly a year ago.

When exactly will his value be higher than RIGHT NOW?

The Rockies are sub .500 now and don't have the arms to catch up with San Francisco for the West nor for Atlanta for the Wild Card.

So take a look at Jimenez as a chip. A young good starting pitcher who everyone thinks is an ace!

Why hold on to him until people figure out he's NOT an ace?

If the Yankees want to give up some of their top prospects (and supposedly Jesus Montero is being offered) take it.

Drive up the price as the Yankees, Tigers, Reds and almost every other contender is looking for an arm.

With Carlos Gonzalez and Troy Tulowitzki locked up for long term deals, the Rockies can't really afford many expensive mistakes. And expecting Jimenez to be the pitcher that he was for 1 half of a season as opposed to the pitcher he was for 3 seasons is a risky prospect.

Get two quality players and let him become a decent but not great player for another team!

And don't wait too long.
Did someone say "Brandon Webb?"