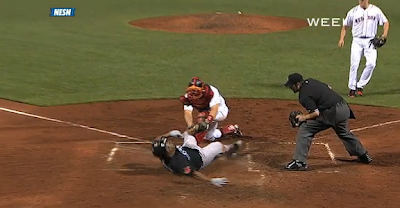 I listened to the last inning of the Red Sox/Blue Jays game last night and I heard a real thriller.
A tight game became razor thin at the end.

With 2 outs, JohnMcDonald singled home Edwin Encarnacion for the tying run and Jonathan Papelbon blew the save.

But that's not what happened.

The replay showed that in fact Encarnacion missed home plate at first but his left leg touched home plate before Varitek actually put a tag on him.

Umpire Brian Knight got the call wrong.
It was a tough call. It was a bang bang play involving lots of movement at home and I am not blaming him.

But why should we pretend that he got the call right?
He didn't. I saw the replay.

And do you know what? It sours the game a little for me. It makes a win, that was already bittersweet with the Lester injury, less satisfying. The Red Sox didn't earn it.

One of the most common illogical complaints I hear from people who are against instant replay is "it will take away the HUMAN ELEMENT."

Let me ask you something. Isn't John McDonald getting a clutch hit off of an All Star closer with 2 outs in the 9th inning part of the human element?

Isn't Edwin Encarnacion making a great slide when he realizes that he doesn't have a clean lane to the plate part of the human element?

They both did something clutch and terrific on the road against a division rival and they are denied being credited as such because... why? Because technology is scary? Because you'd rather have something done now than have it be right? Because first impressions are better than reality?

It's clearly not "The Human Element."

And this is coming from a Red Sox fan who benefited from the blown call.

I'd rather my team earn their victories.

For more on this subject, watch the video.