Ryan Ludwick and The Right Stuff 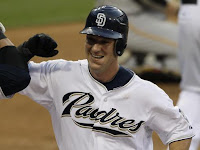 There's a great moment in The Right Stuff that I thought about when I heard the Pirates dealt for Ryan Ludwick today.

When Alan Shepard climbed into the capsule, getting ready to be the first American into space, he saw there was a hand written sign placed on the capsule. It read "No Handball Playing In This Area." Shepard saw it was placed there by John Glenn as a joke.

It was a lame joke and Shepard pointed that out to his rival. He thought Glenn was too squeaky clean not one of the boys.

Glenn for a moment is disappointed that his attempt at humor was rejected but then Shepard says "But I do appreciate it John. I surely do." And they share a bond at that moment that was real and warmer than anything they had up until that part of the movie.

And it was the moment where all the animosity between the two ended. They had a common goal that was greater than their many differences. At that moment they were only compatriots.

So what the hell does that have to do with Ryan Ludwick being picked up by the Pittsburgh Pirates?

OK, in my analogy, John Glenn is the Pirates organization and Alan Shepard represents the Pirates fans. And the lame handball joke? That's the trade for Ryan Ludwick.

Is it a difference maker?
No.
Will he lead the Pirates to the playoffs?
Probably not.
Will it be a forgotten move in a few weeks?
Probably.

But Pirate fans see the team TRYING to improve for the stretch run instead of shipping off the players that are any good.

That's Shepard saying to Glenn "I do appreciate it. I surely do."

For the first time in a long time, the Pirates are trying. They are giving a damn. And the team isn't just pocketing the revenue sharing.

It's a change in culture.

It's the right stuff.

And rent The Right Stuff. What the hell is the matter with you?