What should we do if Jose Bautista hits 62? 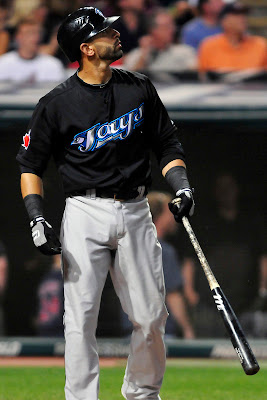 Jose Bautista has 31 home runs before the All Star Break.
He may have more if he gets a hold of one today.

Remember how having 31 homers at the All Star Break used to have people buzzing?

You know what "the shot" is, right?
A shot at 62 homers and maybe pass Roger Maris.

The suddenly "the shot" had a whole new meaning.

As in "a shot of supposed B12 by Alex Rodriguez's cousin in a bathroom stall."

So here we are and Jose Bautista is making a run at 60.
What are we supposed to do?

Like, oh I don't know the fact that he never produced like this before and suddenly became a 50 home run hitter?

And he did so without a change in environment (like Curtis Granderson heading to homer happy Yankee Stadium.)

And the fact that he is from a country that has relaxed laws about steroids and HGH and plays his home games outside of the United States.

Is it out of line?

As I wrote about the burden of proof with Barry Bonds, our guard is up now. It is the result of being burnt so often. Sure Bautista is paying for the sins committed by a previous generation of sluggers, but this is normal.

Like anyone who has been dumped, you start to get defensive when your next romance starts to go down old paths.

The pendulum has swung the other way. We used to celebrate without asking questions. Now we say "Hold on a second. I'm not going to be a little tempered in my euphoria this time."

We have grim reminders with Bonds' trial earlier this year and Clemens being grilled now. Are supposed to just take it on faith that Jose Bautista is clean?

I jumped up in the air when McGwire hit HIS 62nd.
I did a dance when Sammy Sosa hit HIS.

Not sure I would do that with Bautista.
It's not fair, but the truth isn't always fair.