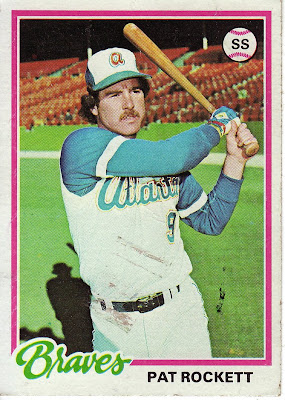 I dug up this old card when I was at my parents place.
Pat Rockett. What an awesome baseball name. It's even better when you realize that he was a Texas high school football star. I assume he was a quarterback with a name like that.
He had, according to the card, one of the best infield arms in the minors. Of course he did.
It was a custom name for an announcer.
"Grounder to short... Pat's got to hurry... HE GOT HIM! A ROCKET FROM ROCKETT!"
Seriously players with awesome names who don't become stars seem somewhat tragic.
Rockett was drafted by the Braves in the first round of the 1973 Draft (10th over all.)
It was the same draft that featured David Clyde, whose career was ruined by the Rangers management.
Hall of Famers Dave Winfield and Robin Yount were picked ahead of him.
Hall of Famer Eddie Murray was picked after him.
So were Fred Lynn, Lamar Hoyt and Mike Flanagan. So there were MVPs and Cy Young winners left in that draft.
But he made the big leagues, which Glenn Tufts, Billy Taylor and Lew Olsen never did. They were all picked ahead of Rockett.
In the end Rockett played a little for the Braves in 1976, some more in 1977 and not so much in 1978 when this card was issued.
He's wearing the lower case a Atlanta hat and the blue sleeve uniform. Really only Hank Aaron looked good in that uniform. And of course this was that awful middle zone in Braves history... post Hank Aaron and before the rise of Dale Murphy and "America's Team."
It's a classic Topps "Fake mid swing pose" which I never understood why they were always taken AWAY from the batters box. He's in Candlestick (and I think you can see the shadow of the camera man in the picture.) And he has a great expression. Not QUITE the blank stares a lot of players have in these pics.
Rockett is envisioning it. He is seeing that imaginary hit go into center. I wonder if he hit it out in his mind.
His lone major league homer was hit on Septmber 28th, 1977 against the Astros' Mark Lemongello (another Topps favorite.)
Pat Rockett was eventually traded to the Blue Jays in a deal involving Chris Chambliss, but he never played a day in Toronto.
He finished his career in Syracuse in 1980 as a 25 year old. He was teammates with future Blue Jays stars Willie Upshaw and Lloyd Moseby as well as future Celtics legend Danny Ainge.
He never became a star, but his name was star worthy.
He gets a salute here from the staff at Sully Baseball.