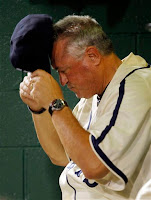 Well the biggest 20 games in 19 years for the Pirates couldn't have started off worse.

This time the whuppin' took place in the 5th instead of the first, but seriously... if the Pirates want to have a share of first place, it would behoove them to not lose series at home. It would be nice to see Kevin Correia last 5 innings.

Tomorrow afternoon, they will try to salvage a game and some dignity before heading to Atlanta.

Yup, Atlanta. If Pittsburgh is going to slay some demons, you sometimes need to go to the source of the torment.

The Red Sox had a beast to kill and they needed to go through the Bronx to do it.
Maybe they need to go to the place where Francisco Cabrera drove in Sid Bream to get back on track.

OK, it's not EXACTLY where the 1992 NLCS was played. (Fulton County Stadium is leveled and part of Turner Field's parking lot.)

But play with some urgency. Win tomorrow and first place is still in reach.