Today we continue the Why Each Team's Potential World Championship Would Be Good For The Game series by taking a look at the Arizona Diamondbacks.

Yet here we are with a little bit more than 2 weeks to go and the Diamondbacks have the division all but sewn up. And, like the 2002 Angels and the 2003 Marlins, they are that most dangerous of playoff teams: One without lots of star power and too young to realize that they don't belong.

The idea of a World Championship being won in the desert might not be pleasurable to Fox executives, but there are many reasons why a casual fan should become Diamondback fans this October.

1. A championship would be a celebration of Kirk Gibson, which is always a good thing.

Kirk Gibson is everything you wanted in a player. He had talent, played hard, played hurt and came up big in the big game. He was a Michigan boy who became a star for the Tigers, helping them win the World Series by launching a dramatic home run off of a Hall of Fame closer, Rich Gossage, in the 1984 World Series.

And that wasn't even the most dramatic World Series homer off of a Hall of Fame closer in his career. (I think you know which one I am talking about.) Like a championship Johnny Appleseed, he took over a rudderless Diamondbacks team and after half a season is stunningly putting them in the post season. More clips of the 1984 and 1988 World Series? More tough minded players playing above their abilities?

2. Baseball needs new stars like Justin Upton to shine on the biggest stage.

As baseball turns the page from the Steroid Era, they need new superstars to bring style AND substance to the field. Justin Upton, who was already fine if inconsistent player before 2010 has become an MVP candidate under Gibson. He's exciting, talented and thankfully doesn't have a Lou Ferrigno physique.

Baseball needs to market players like Upton to the fans as the new generation of hitting heroes to go against the Tim Lincecums, Felix Hernandezes and Justin Verlanders on the mound. Having him win a World Series would help matters. 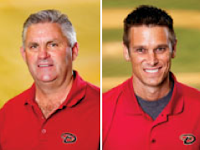 3. Kevin Towers and Jerry DiPoto would show everyone how to rebuild a team into a champion.
Previous GM Josh Byrnes netted Ian Kennedy in a massive three team trade but the bulk of the teams upheaval is the result of front office men Kevin Towers (GM) and Jerry DiPoto (VP of player development.) DiPoto got Daniel Hudson from the White Sox while Towers rebuilt the bullpen and both put their confidence in Kirk Gibson. In less than a year since the A. J. Hinch experiment failed, the Diamondbacks went from 97 losses and being the second worst team in the National League to coasting to the playoffs.

Remember when Brian Cashman went into the 2008 season trumpeting pitching development? They were going to build a new pitching staff around Phil Hughes, Joba Chamberlain and Ian Kennedy.

That turned out to be a disaster as the Yankees finished in third place, missing the playoffs for the first time since the Wild Card era began. The next year they went back to buying free agents which is what Cashman does best. But Kennedy DID develop into a front line starter for a playoff team. Just not the Yankees as he came over in the multi team deal that sent Curtis Granderson to the Yankees.

Both sides did well in the trade, but the Yankees could use a young arm like Kennedy in their rotation.

As the 2001 World Champion Diamondbacks celebrate their 10th anniversary, one player links that team and current Division leaders: Lyle Overbay. He played a handful of games as a call up with the 2001 squad and wasn't on the playoff roster. Now he came over as a late season pick up and has contributed with some big hits.

Having him be part of TWO World Championship Diamondback teams, no matter how tangential, would be a cool legacy. 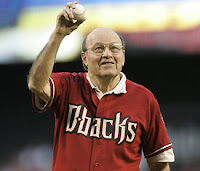 6. Joe Garigiola could join the broadcaster booth for the World Series

I'll say it. Joe Garigiola is my favorite ever baseball voice. He is funny. He is knowledgeable. He is unique. And he is sincere. Listen to him call the 1975 World Series... or his insights in the 1986 World Series... or when he called the Phillies first ever title in 1980 he had the restraint to say "The crowd will tell you what happens" and let the moment speak for itself.

His son has been one of the big wigs at the Diamondbacks from the beginning and Joe does some announcing for them. Why not have him call a game or two? At least an inning? Or is it illegal to have someone other than Joe Buck and Tim McCarver in the announcer booth now?

7. A ring for unlucky Charles Nagy.

Charles Nagy was a member of the 1997 Cleveland Indians, a team that was a mere 2 outs from being most beloved team in Cleveland history. (Technically they were one out away because the game tying run in the 9th inning of Game 7 was on a 1 out sacrifice fly. Had Manny Ramirez thrown an Ichiro-esque laser to home plate, the Indians would have been champs.)

Poor Charles Nagy, who was part of the massive Indians rebuilding process in the early 1990s, was brought out from the bullpen to help clean up Jose Mesa's mess. He got out of the 10th but Tony Fernandez's error in the 11th kept the inning going. Eventually he let up Edgar Renteria's single that went off the tip of his glove.

He will always be labeled the losing pitcher of Game 7 of the World Series.
He retired ringless. It wasn't his fault.
He deserves a ring.

8. The first World Series title may have come too quickly. Not this one.

The Diamondback fans didn't really have to suffer for a World Championship, did they? They had one bad inaugural season. Then their second season they had a 100 win team. Their third season they had a contender. Their fourth season they won the World Series. For all the Cub fans transplanted to Arizona, it must have seemed a smidge unfair. How was a 4 year wait earning a title?

Besides, the team was almost entirely cobbled together from other organizations. The franchise was young but the tea, was an old veteran squad filled with players dying for their first ring. The team earned their championship. Not sure the fan base did.

Well it has been 10 seasons since then. They are a 14 year old team with many homegrown players and some roots in the community. A Diamondback championship this year would be a tip of the cap to the organization, not wreck less spending.

I've written about this before, but Phoenix should be a baseball crazy city. The Diamondbacks are the only team to deliver a World Championship to the city. Lots of terrific baseball comes out of Arizona and Arizona State. And going to Chase Field should be a destination during the hot Arizona summers. And yet they don't have the reputation of being a great baseball first fan base.

I've heard all the reasons. The newness of the team. The transplanted fan bases who don't change their allegiance. The team being merely hired guns. The Suns being the number one team.

Well here's a tip, Cub fans and Indian fans living in Arizona. Your adopted city can give you some baseball joy. Not only did they make the playoffs 3 times in their first 5 seasons, but after they split the team up after the 2002 playoffs, it only took until 2007 to get back to the NLCS. And after falling from contention after the 2008 season, it took just 3 years to get back to the playoffs again. And native Arizonans! You have a winning team! Embrace that winning tradition.

Phoenix should be like St. Louis, Boston, New York and Cincinnati as baseball first cities. They don't have their tradition, but they are building it!

10. It's the EXACT kind of team that people claim could never win the World Series.

The Diamondbacks payroll is 25th out of 30.
They don't play near a traditional large media market.
They don't sign big priced free agents.
They are the kind of team that people wring their hands about at the beginning of the season saying "What chance do they have?"

Well it looks like they have quite a big chance now! They are going into the playoffs and have a shot to have home field advantage in the Division Series. And how would they fare against Philadelphia? Well what were the Giants chances last year?

Casual baseball fans should be cheering on the Diamondbacks. as the very underdog that supposedly has no shot in baseball. (Isn't it odd that EVERY year there is a low budget underdog that gets in but nobody ever notices that?)


So while at first glance the Diamondbacks might not capture the imagination of a baseball going public, look again.