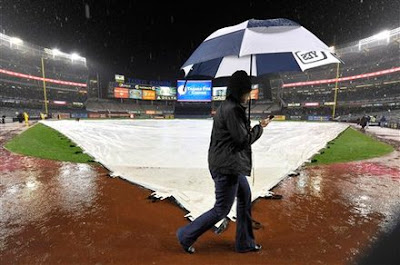 After a mindbogglingly amazing (if agonizing for Red Sox fans) finale to the season, I thought "Man, if this is what the playoffs are going to be like then October is going to be incredible."

Well if tonight was any indication of how it is going to unfold, then this post season will be the biggest let down of anything that didn't have Kingdom of the Crystal Skull in the title.

Yeah it was cool that Matt Moore had his second ever big league start in the playoffs and he dominated the Defending American League Champs. But guess what? The game was a snooze fest.

And off to New York for the best game 1 match up of the year and we get one inning... and rain.
Enough rain to call the damn game.

If the rain was that bad in the second, why start the game in the first?
Is this the 2008 World Series all over again?

The thing that made me pick the Tigers for the Division Series was the idea of Verlander pitching twice. I expected him to go deep in each game... deeper than one.

Personally I would start Verlander in Game 2.
Make someone do a double take to see him starting Game 1 and 2 of the playoffs.

I better see some closer games and closer inspection of the weather report tomorrow.
It's supposed to rain tomorrow. I hope they don't get 2 innings in and push it to Sunday.