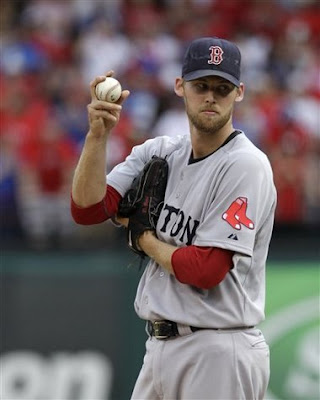 Jonathan Papelbon's contract is up after this year. And after his disastrous 2009 playoff performance and a subpar year last season, the Red Sox seemed ready to bid adieu to Pap, take the two draft picks and move on.

The reason they could afford to do that? The great Daniel Bard, of course! Bard was a kick butt prospect who seemed all but ready to assume the closer role when Papelbon brought his Irish dig elsewhere for big money and an inevitable breakdown (which makes him a prime candidate for the Mets, Cubs or Orioles.)

Have you seen how awful he has been lately?
He's lost 3 games already... THIS MONTH! I don't know what his ERA for September but going into today it was over 17. And after coughing up the game today (which would have given the Red Sox a little breathing room when the Rays show up tomorrow.

Heck, it was a game where Lackey actually settled down and wasn't HORRIBLE.

And Bard blew it.

So when Papelbon goes into negotiations this November, the opening sentence should be "So... you want Bard closing games?"

And then toss a few million bucks to Bard. Papelbon will get the big deal and he wouldn't have if Bard was even adequate down the stretch.

Let's hope the Orioles can show a little resolve and win.

And let's also hope that Bard finds his way. It might profit Papelbon later, but we need an 8th inning guy NOW!