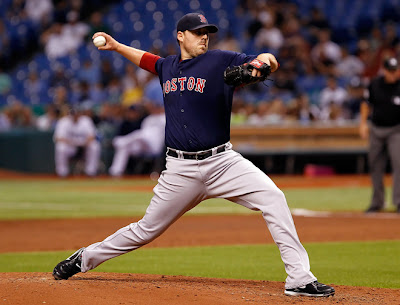 The most startling thing about John Lackey's 2011 for the Red Sox is that he had some good games. Seriously, sometimes he pitched damn well.
And here we sit in mid September and he has a 6.30 ERA and couldn't it make it out of the 4th in a key game.
He's in his mid 30s. He's not going to get better.
And he is owed more than $45 million over the next 3 years.
So let me ask the question.
What would be worse for the Red Sox?
Paying him $45 million to lose games...
Or paying him $45 million to NOT pitch for the Red Sox.
There is no getting around the dough. The Sox are on the hook for it.
But I say the Red Sox are better off having him go elsewhere.
Just saying.
Another loss tomorrow and suddenly the Red Sox are in a race.