Hats off to Rivera... the greatest closer ever 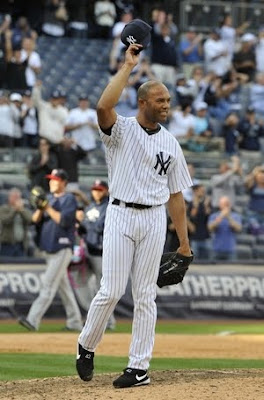 Mariano Rivera didn't need to pass Trevor Hoffman on the All Time Saves list to take the title of Greatest Closer Ever.

Hoffman, while a fine closer, isn't in Rivera's league.
Only Gossage, Fingers, Wilhelm and Eckersley should be mentioned in Rivera's company. And with no offense to them (nor to Sutter, Quisenberry and Tug McGraw) Mariano is the greatest.

Yeah he doesn't throw the innings that Fingers, Gossage, Lyle or the like threw.
Nobody has done what Rivera does better: Make the 9th inning a foregone conclusion.

And here's the scary thing: Remember when Rickey Henderson passed Lou Brock and declared himself the greatest of all time? We laughed but was he wrong?

Rickey broke Lou Brock's stolen base record when he swiped his 939th base in 1991.
He would play for another 12 seasons and stole 467 more bases.

That's going to be Rivera with saves.
Does he show ANY signs of slowing down?
Is there ANY reason to believe he won't still be an elite closer in 2 or 3 years?

That's why I BEGGED the Red Sox to sign Rivera to a multi year deal last winter.

I have written a lot of positive things about Rivera... a lot considering I am a Red Sox fan.

I drove home the fact that Hoffman is NO Rivera.
I saluted him...
I argued he was the difference over the other playoff teams in 2009....
I argued that he should have won the World Series MVP in 2009...

And I pointed out that if you thought he was overrated then you are an idiot.

Jeter got more fanfare for his 3,000th hit.
Rivera's accomplishment was more muted.

Why?
Because Rivera didn't need it to claim the title of "Best Ever" at what he does.