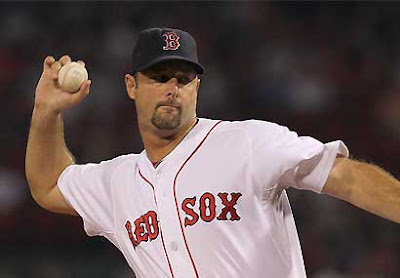 And once again, it was going to be a night where Wakefield wasn't going to get a win.

The Red Sox just started scoring and kept scoring. And they scored so much that even Toronto's 6 runs couldn't make a dent in the lead.

200 wins for Wakefield.
And if he somehow gets 7 wins between the rest of this year and next year, he will have the most wins in the history of the Red Sox.

And thanks to the Orioles beating Tampa today, the playoff Magic Number is down to 12.
Lackey is pitching tomorrow afternoon.

If the Red Sox win tomorrow, even if the score is 38-0, it will be a Dodged Bullet.