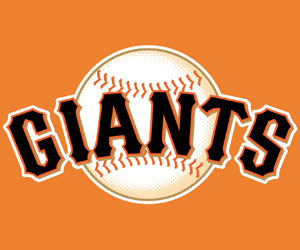 Continuing the Why Each Team's Potential World Championship Would Be Good For The Game series, we move on to the Defending World Champion San Francisco Giants.

Now earlier I wrote posts for the Chicago White Sox, St. Louis Cardinals and Cleveland Indians knowing that their time as contenders wouldn’t be long. I never expected to throw the Champs into the “Quick before they fall out” pile.

But here we are. In the month since acquiring Carlos Beltran the Giants have gone 10 games in the wrong direction. They have turned a 4 game lead into a 6 game deficit. And with a showdown against the Diamondbacks looming, their season could startlingly be over in early September.

Their losing ways have been against lowly teams like the Padres, Cubs and Astros. A year after being unlikely Cinderella champs, they are the targets for teams with spoiling a pennant on their mind.

Then again, a strong September could catapult them right back into the playoffs, playing their patented brand of heart attack inducing baseball.

Yesterday they let go of Aaron Rowand and Miguel Tejada, thus ending a "Third ring for Rowand" and "Win a Ring for Tejada" motivation.

But Madison Bumgarner won and who knows? The champs could defend their crown

Now with the Giants, I am not going to make the reasons to support them winning a title personal. They are my dad's team, my son's team and my favorite National League team. But every team has fans and every team has someone's dad rooting for them

These are for fans everywhere. 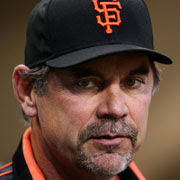 1. Another World Series title could put Bruce Bochy into the Hall of Fame.

He's borderline as it is. He took a Padres team that, save for 1984, was a consistent non factor and in short order led them to the 1996 post season. Then he won the 1998 pennant in San Diego. That team was dismantled but he put together Division winners in 2005 and 2006 in PetCo Park. Then he won the first ever World Series title in San Francisco with one of the worst offenses on paper for a fall classic.

He is a classic old school manager who gets respect throughout the league. AND he is already tied with Earl Weaver, Bobby Cox and Leo Durocher for World Series titles.

Another one would make the conversation very interesting. 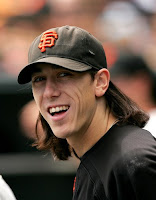 Isn't it fun to see greatness unfold? Sometimes aces can start off wonderfully and even become World Series heroes and Cy Young winners and then fade out from injuries or ineffectiveness. (Think Bret Saberhagen, Fernando Valenzuela and Dwight Gooden.)

I hope Linecum has a Tom Seaver, Greg Maddux or Tom Glavine type of career. He already is a multiple Cy Young Award winner and was a legit post season ace, winning the clincher.

He should be one of the great faces in baseball and a player to market the league around. Having him win MORE in October will make that possible. 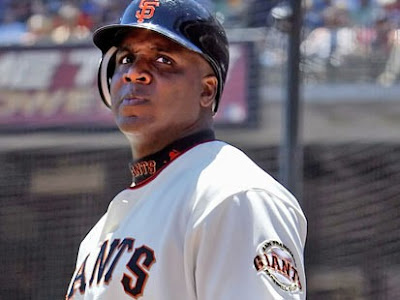 3. Maybe there can be real closure with the Bonds era.

I have been a defender of Bonds despite thinking he used tons of steroids.

I honestly think that time will be kind on him. His new trial will happen soon and inevitably it will end with, at worst, a slap on the wrist.

The Giants have clearly moved on from the Bonds years (#25 jerseys were oddly absent the last time I went to the Giants dugout.) The team has built a World Champion without him.

Eventually I hope he will return to the Giants in some capacity. If Mark McGwire can return as a hitting coach, why can't Bonds? Look, EVERY team had players who were on juice. It was the era. And now the era is passing. Another title in San Francisco might help put it a little further back and Bonds wouldn't have to talk about the past. (Oh sorry. That's McGwire's line.) 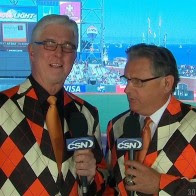 4. More October calls from the best announcers in the game

Duane Kuiper and Mike Krukow are the best play by play men in the game. They are knowledgeable, funny, classy and have a sincere style to calling the game. They aren't prepackaged or playing a part. And when they get into a game, it means some GREAT calls.

Meanwhile Jon Miller also calls games for the Giants and he is the Gold Standard.

But best of all listen to Dave Flemmings' call of Edgar Renteria's eventual World Series winning home run. The way his voice cracked meant he was speaking for Giants fans everywhere who couldn't believe their eyes when the ball left the park. This October needs more calls like that.

5. Another Championship would mean more celebrating with Willie Mays

The greatest player in baseball history is Willie Mays.

Willie Mays is still with us.

Willie Mays still has all of his faculties.

Willie Mays must be celebrated for as long as he is on this Earth.

6. The Giants - Phillies rivalry needs to be cultivated!

The Giants and Phillies could be a great post season rivalry in this decade. They have stockpiled aces. They played a wonderful series last year. AND there seems to be bad blood between them.

The Giants would inevitably have to go through Philly.

A laid back West Coast city and a wound tight East Coast city each with recent World Series titles could make for many great Octobers for years to come.

7. Carlos Beltran could get redemption for the "Called Third Strike."

Baseball is great for redemption stories. And right now, despite putting up great numbers in his limited post season experience, Carlos Beltran's best known highlight is looking at a called third strike to end the 2006 NLCS.

A base hit would have tied the game. A double would have won the pennant for the Mets. Instead it was St. Louis who won.

He may never get redemption in the eyes of Mets fans, but a little peace for Carlos would go a long way (and help him collect this winter as a Free Agent.)

8. Brian Wilson in the spotlight can only be a good thing for baseball.

If Zach Galifianakis was a baseball player, who would be be?

OK, probably Brody Stevens, but that's not the point. The point is Wilson has the great closer stuff and the All Star resume and the clinching the World Series highlight on his reel to give him substance.

And his style is so bizarre and legitimately funny that it can only bring attention to baseball from people who normally wouldn't watch.

Also it could spark a renaissance of awesome facial hair on closers and more goofiness. There is a place for a stoic Mariano Rivera. But it's nice to have a pitcher look like Rasputin on the mound.

9. A Repeat World Series title would give the Showtime show a great ending!

I thought it was going to have a great finale with a return to October. If thye come they erase a 6 game hole and make the post season and win it all... the show might win the Emmy.

It would be GREAT TV!

10. The Giants becoming the fun championship caliber team will help lead MLB into the 21st century!

As I said in a Sully Baseball video, the Giants are the fun marquee team to root for. They don't have the pompousness of the Yankees nor the annoying elements of Red Sox Nation. Fans who think they dominated the past decade (winning 2 World Series each between 2000 and 2009 plus consistently being in the playoffs will do that) have a new option. The Giants have a sense of humor that many of the Northeastern teams don't have. But that sense of humor is meaningless without consistently winning.

Bandwagons are healthy for sports. People have jumped on Steeler and Cowboy bandwagons for generations. Same with the Celtics and Lakers. And every once in a while a team with a truly unique personality becomes a trendy favorite. Think of the Raiders in the 70s and 80s. The Bulls of the 90s.

It's tough to do that when they are playing golf in October.


I thought for sure the National League West was a slam dunk. I didn't think the Diamondbacks would be a factor.

But here we are. The Defending Champs and the team that should be a flagship franchise for baseball are fighting for their playoff lives.

If they come back and win it all, the 2011 season DVD will be amazing!