We interrupt our Red Sox sorrow to crap on Colby Rasmus 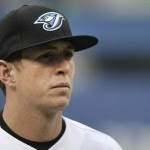 As the Cardinals celebrated their improbable run to the National League Wild Card, I saw all the players dumping beer on each other and hugging.

Who wasn't there?
Colby Rasmus.

Remember him? The guy who bitched and moaned his way out of St. Louis.
The guy I crapped on last year for complaining about playing time to LaRussa.
The guy who suddenly had a bunch of defenders chewing me out, talking as if he was an elite player (????)

Now of course they were in FIRST PLACE on July 26th, so I guess his defenders could say they fell out of first without him.

But I can't help but wonder if the Cardinals won partially because the guys in the clubhouse were the ones who were on the same page.

Maybe if Colby Rasmus didn't act like a 23 year old who thought he invented the game, he'd be going to the post season too.

Ah well.
He will be good NEXT year... (not 2012. I mean the perpetual NEXT year for prospects who never make it.)

OK. Back to Red Sox misery.