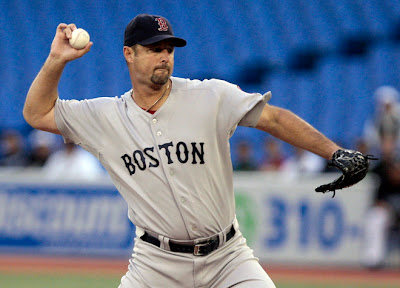 Tim Wakefield might never win another game in the major leagues. Seriously, if he couldn't get the victory TONIGHT it might just never happen.

199 wins, an All Star appearance and 2 World Series rings (not to mention 3 ALCS wins against the Yankees) isn't shabby. That could be it.

As for this Red Sox, who tonight won as mindboggling an awful game as you can possibly experience, we might have to admit it.

But that 8th inning was grotesque. And frankly this team is stumbling into October. They COULD pull a 2006 Cardinals and peak at the right time.

Between you and me, I think they will more likely pull a 2007 Angels and fade away.

It's best we lower our expectations.
Be happy that the Red Sox will, barring a monumental collapse, be playing October baseball.
And be happy for any win.

And REALLY hope the Yankees don't win it.

Got to update the tally.


The Red Sox have outscored the Blue Jays 24-12 over three games but lost 2 of them.
That's messed up.

Go for the stupid split tomorrow.