Nominate Bill Buckner for an Emmy!!! 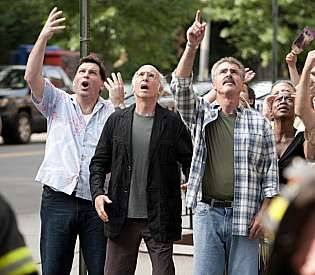 Who knew that Bill Buckner could keep up with Larry David on Curb Your Enthusiasm?!

He was terrific... poking fun at himself, making fun of Michael Jordan's Hitler mustache, showing his incredible class and withstanding Susie Essman screaming at him (probably worse than any abuse he got from Boston fans.)

And his redemption at the end of the show was wonderful. I won't spoil it. Watch the show, if for no other reason than seeing Bill Buckner at a minyan.

BUT... as I said many times in my life and on this blog... Bill Buckner's error in the 1986 World Series is THE MOST OVERRATED PLAY IN THE HISTORY OF AMERICAN SPORTS!!!

The myth is that if he made the play, the Red Sox would have won the World Series.
FALSE! The game was tied after the Wild Pitch by Bob Stanley.

And the other part of the myth is that the Mets won the World Series after he made the error.
FALSE! The play ended Game 6. There was a Game 7.

But the oversimplification of that bizarre inning led to Bill Buckner taking the brunt for the series because of a play that could not have won the Series for the Red Sox nor did it clinch it for the Mets.

I am glad Red Sox fans in 1990 gave Bill Buckner a standing ovation when he returned to the team.

I am glad Red Sox fans gave him a standing ovation in 2008 when he returned.

And I am glad Buckner is such a cool guy that he would poke fun at himself with Larry David.

Now put his myth to rest. He was a wonderful player (and a former batting champ) who got way too much crap.

He may not have ever earned a World Series ring. But he is eligible the Emmy for Best Guest Performance by an Actor in a Comedy Series!

I hope he gets it!