The latest entry for the Why Each Team's Potential World Championship Would Be Good For The Game series will be for the Philadelphia Phillies.

A lot of these entries have been for long shots or teams that are pretty much dead right now (I'm looking at YOU Indians, Giants and White Sox.)

But now it is time for one team that not only has a shot, but should be the prohibitive favorite against any team.

The Phillies were picked by many people (including yours truly) to win it all. And frankly it would be stunning if they didn't. Now if you are the kind of person who doesn't like offense, pitching and power, then the Phillies aren't for you.

Today they clinched a playoff berth.
With 95 wins and 16 games left, they are a cinch for 100 wins.
If they win 102 games, they will have the best regular season record in franchise history.

And with the memory of last year's stunning loss in the NLCS against San Francisco fresh in their minds, they have gone all in.

The Phillies are the Big Bad Wolf. They could turn the Red Sox or Yankees into underdogs.

So they are another big market Northeastern team with unruly fans using their deep pockets to buy another championship!

What could there POSSIBLY be to root for with a Phillies World Series title?
PLENTY! 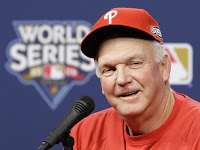 Charlie Manuel seems like a cool guy. A classic "Gold Ole Boy" Southern manager who has tamed the wild Philadelphia fanbase and delivered the city's first Championship in a quarter century.

While the classic Hall of Fame manager seems to be a strategist or a fiery, who can deny the results. With a clinched playoff spot this year (and assuming the Division is inevitable) he will have 5 straight Division Titles, back to back pennants and the 2008 World Series title.

Throw in the fact that his Phillies zoomed past the Mets in the wild 2007 Division race and Manuel could be the best manager in the team's history. Who is ahead of him?

(He also has another Division Title as a manager of the Indians.) If he wins another World Series title, his Cooperstown resume would start to look convincing.

2. Another title would shine light on the new "Core."

They are all home grown players who have been together for all 5 Division Champions. Throw in Shane Victorino who came over to Philadelphia after making his big league debut with the Padres and you have a core of players who have been together through many different Octobers and give the Phillies a sense of stability with the franchise not seen since the Joe Torre Yankee days. 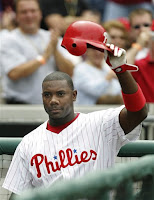 3. The redemption of Ryan Howard's contract.
Speaking of that core, Ryan Howard has been much maligned since signing his long contract extension. I understand the deal emotionally. Having him play the bulk of his career in Philadelphia would mean that Phillies fans could invest some emotion in the big guy. And he is no doubt one of the more likable stars in the game.

But with his numbers declining (except RBI... the REASON he is paid so much) and the age of sluggers suddenly getting good again seems to be over, the deal looks like it might be an albatross for the next 5 years.

Ahh but what if he helps the Phillies earn ANOTHER World Series title? You could say "Sure he's over paid and slipping, but that's the price for an MVP, 3 pennants, an NLCS MVP and being part of 2 of the only 3 World Series titles in team history." 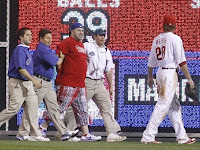 4. Speaking of redemption, Philadelphia fans can show themselves in a better light.

Want to change that? When the Phillies win the World Series, cheer. Clap. Stomp your feet. Have a great time. But don't riot. Don't flip cars over. Show some class. And you can say "Yeah, I'm a Philly fan. At least I'm not a Vancouver fan!" 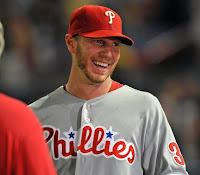 5. Roy Halladay is great for baseball and deserves to be a champion.

As we move past the Steroid Era and pitchers are becoming more and more dominant, it would be nice to see the BEST current pitcher get a ring.

Halladay could win his third Cy Young this year (although it will probably go to Clayton Kershaw) and last year showed his greatness with a regular season perfect game and a playoff no hitter. Today he threw a complete game shutout to clinch a spot in October. He's already a Hall of Famer. He is lacking the ring and he'll join Tim Lincecum, CC Sabathia, Cole Hamels, Jon Lester, Adam Wainwright and Chris Carpenter as current aces who are also World Champions. 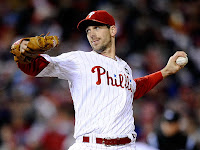 In 2009 World Series against the Yankees, Cliff Lee casually caught a pop up while barely moving his body. He just was so cool and non chalant. That's how he plays the game. He is good. He KNOWS he is good. And he'll just shut you down on HIS terms.

And those terms also means being a cool customer after being traded from the Indians to the Phillies to the Mariners and to the Rangers in two years. And cool in saying "Thanks but to thanks" to the Yankees money and declaring Philadelphia the place to win.

Like Halladay, Lee is one of the stars of post steroid pitching. And save for his two games in the World Series last year, has been as exciting a big game pitcher as you will see in baseball. He should be a champion.

7. Juan Samuel would get his World Series ring.

In the mid 1980s, Juan Samuel was the best second baseman in the National League not named Ryne Sandberg. He was part of the 1983 National League Champion Phillies and looked like he was going to be a staple in Philadelphia for a long time.

Then he went to the Mets, fetching Lenny Dykstra and Roger McDowell, which turned out to be one of the best deals in Phillies history. Samuel is a baseball lifer. He's been a coach and briefly managed the disastrous Orioles last year before Buck Showalter arrived.

The three time All Star has been in professional baseball since 1980 but has never been part of a World Series winner. The current member of the Phillies coaching staff has earned it.

8. A World Series ring for Brian Schneider, the last Expo.

There are very few Montreal Expos left in baseball. Schneider is one of them and he played for the team as MLB was screwing the franchise sending them to San Juan, not letting them call up players in September even while Frank Robinson was putting a winning product on the field. When baseball sent an All Star team to Japan after 2004, the Expos last season, Schneider represented the team. When he returned, they were the Washington Nationals. So by definition, Schneider was the last ever Expo.

He's now Carlos Ruiz's backup and probably won't see any action in the post season. But it would be nice to see one of the remnants of that lost team be rewarded. 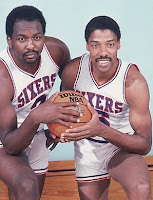 9. Another title would make this the greatest Philadelphia team in history

If the Phillies win the World Series this year, which Philadelphia team would be better in history than this squad? The Dr. J/Moses Malone 76ers? The Broadstreet Bullies? The Jimmie Foxx/Lefty Grove Connie Mack led A's?

This Phillies team might be better than them all.

And sometimes it is GOOD to see greatness unfold and the best of something emerge.

10. Sometimes it is good to have the best team win.

Yeah, underdogs are fun to see win. A little team that could like last year's Giants or the 2006 Cardinals beating the odds can be appealing. But there are other times it is cool to see a team that is clearly the best in the sport take the title and the crown.

Sometimes seeing a champion who was the best from start to finish can be more satisfying than simply honoring whichever team happened to get hot over three weeks. This Phillies team was designed to win the whole damn thing and they played like it since April. There is something to be said for that.

Is there any doubt who the best team in baseball is? Then by definition they deserve to win the World Series!

Oh I know this will be a hard sell for a lot of you. Philadelphia is as bad as New York and Boston in terms of gluttony in many people's eyes. (The Phillies payroll is now bigger than the Red Sox!) But trust me, the world won't end if the Phillies win the World Series. And in many ways, it could be a very cool thing.