In honor of Carlton Fisk... 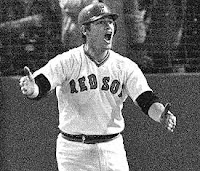 ...the native New England Hall of Famer whose free agency was caused because someone in the Red Sox front office forgot to mail him a contract... who actually played more years in Chicago than in Boston... but will be immortalized by his 12th inning shot in the 1975 World Series... and whose number is retired by both the Red Sox and White Sox...