WHO SHOULD I ROOT FOR? Part 1: THE NL CENTRAL

August is a really fun part of the baseball season... the pennant races are forming in earnest, the trade deadline has passed so the teams are, for the most part, set and head to head match ups between contenders have added weight.

This is also time for a fan like me to adopt a team in each race that I don't have any real emotional attachment to.

With almost every race a tight one (with the exception of the A. L. East where my Red Sox have a full week's lead on the Yankees) I need to pick the teams I am rooting for.

Mind you this isn't who I am predicting will win. Just who I've borderline arbitrarily decided to cheer on.

Today we start....
WITH THE NATIONAL LEAGUE CENTRAL

The teams:
THE MILWAUKEE BREWERS and THE CHICAGO CUBS.

First Criteria: Number of former 2004 Boston Red Sox on the roster. Neither team has any. Nor are there any future Hall of Famers in need of a ring!

Also neither team had a good movie about them as both Rookie of the Year and Mr. 3,000 stunk.

Better move on to another criteria.

But it is not as cut and dry as that. Follow me on this one...
Yeah it's been almost an entire century since the Cubs won a title... but it's only 4 years since their last division title. And this would be the 7th winning season in Chicago since Milwaukee put a team above .500 on the field. There are 14 year old kids in Milwaukee who have never seen a contender in their lifetime.
The Brewers haven't played a post season game since 1982. The Cubs have played 25 post season games since then... and if they had been able to hold leads against the Padres and Marlins, they'd have TWO pennants.

Milwaukee has one World Series title... but it belongs to the Braves.
Plus Chicago has seen the Bears and Bulls win it all...
In Milwaukee you have to drive all the way up to Green Bay to see a recent winner.
I'll say it.
EDGE BREWERS

Third Criteria: Which Manager would you rather see win it. 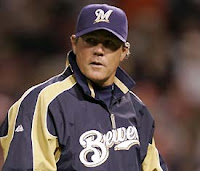 Not even close!
Lou Piniella has been everything advertised... funny, arguing, brawling... who wouldn't want to have him in the dugout and the post game interviews. Plus winning in Chicago might put him in Cooperstown... and we all want to hear that speech!
I wouldn't recognize Ned Yost if he came into my house in full uniform.
EDGE CUBS

Fourth Criteria: Which team had the better in dugout brawl?
The Brewers had a good one, but the Cubs meant an ace was reborn!
EDGE CUBS

Fifth Criteria: Which city had the cooler high school rebel? 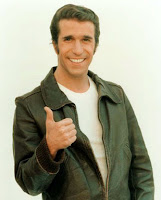 Chicago's Ferris Bueller was cool, but he only for one movie. The TV spin off was unwatchable. Yeah Milwaukee's Arthur Fonzerelli eventually jumped the shark, but he gave us years of cool before hand.

Sixth Criteria: Which Stadium Is Nicer? 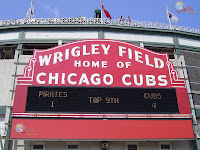 
Seventh Criteria: Best Between Inning Rutual
Singing along to "Take me out to the ballgame" was awesome when you were singing with Harry Carey. Less awesome when you listen to Ozzie Osbourne warble through it.

But Sausages Races are always cool... nothing beats adults dressed as sausages in an athletic activity. 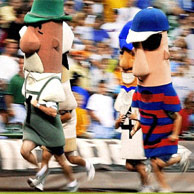 
Time for the tie-breaker... the criteria that will determine which team I'll be rooting for down the stretch of the NL Central race! 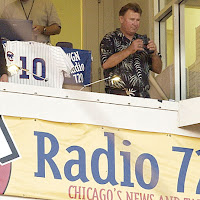 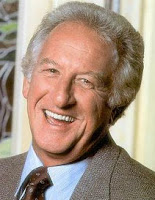 Oh Ron Santo is great alright! Listening to how sloshed he gets during the game and how he is basically cheering and not announcing... he must be a God for Cub fans who are too drunk to know their team is losing.

But come on! We're talking Bob Uecker here!
Uke kicked butt in the old Miller Lite ads (I must be in the front row!) and what announcer hasn't mimicked his "Juuuuust a bit outside!" line from Major League.

Plus let's see Ron Santo do 5 seasons of Mr. Belvedere!


So there you have it!
I'm putting on my old Cecil Cooper hat and rooting for the Brewers!

Besides, Cub fans... you don't want to lose that identity of lovable losers, do you?