In honor of Joe Morgan and Morgan's magic... 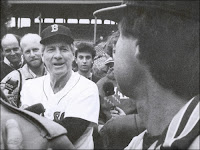 ... who took over for Johnny Mac

... and woke up a sleeping Red Sox team with one of the most dynamic months in team history

... and who I saw lose twice in Oakland during the 1988 Playoffs, but still made Red Sox Nation proud

... who, as a former Walpole snow plow driver, captured all of our imaginations that a regular guy could manage the Sox to two division titles in three seasons...