Can you imagine how awful Jim Leyland's lung's must look today? 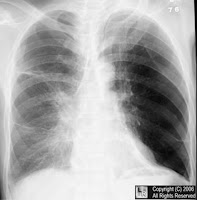 Things must look brutal inside the lungs of Jim Leyland, the chain smoking manager of the Tigers.

On July 23th, the Tigers matched their biggest division lead of the year (2 games over the Indians). They had a .608 winning percentage, second only to the Red Sox, and were on pace to win 98 games and cruise to the playoffs.

Since then? They are 2-11. They haven't won in the month of August yet. They have fallen 1/2 a game behind the Indians (who are in a free fall of their own, losing 7 of 10) and allowed the Twins to creep back into the division race and could fall behind the Mariners and Yankees (!!!) as early as tomorrow. The cruise to defending the American League pennant could mean a 3rd place finish for the Wild Card.

Their pitching is battered, their once proud bullpen is a mess and Gary Sheffield has probably accused Jackie Robinson's widow of racism.

And Leyland puffs away... hoping that his dreams of World Series redemption don't go up in smoke as well.