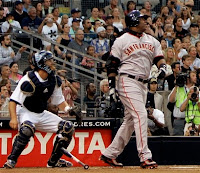 Barry Bonds hit home run number 755 today, and I for one hope he takes his sweet time hitting the record breaker.

No, not because I don't like Barry. I actually DO like Bonds and think the whole steroids mess is bigger than Bonds and bigger than we'll ever know. But I covered all of that before.

No, I want it dragged on for selfish reasons.

Selfish reason #1: I like the idea of every major newspaper and news bureau in the country sending people off to cover the Giants. I like that reporters who Bonds wouldn't wipe a Kleenex on and who have been writing anti Bonds articles for years now have to cover this terrible boring old lifeless team day in and day out.

The idea of Bill Plaschke or Bill Madden following the ups and downs of Randy Winn and Kevin Correia everyday while terrific pennant races are going on cracks me up. I don't want it to stop.

Selfish reason #2: Because of Barry, the Giants are must watch TV on FSN Bay Area or appointment radio on KNBR. Even my wife, who doesn't follow baseball and calls Bonds "The Fat Cheater" watches when he is at bat.

Selfish reason #3: The inevitable disappointment when Fred Lewis comes in to pinch run for Barry. My wife and I were watching a game the other day. When Lewis came in, she couldn't believe it.

"Why is he coming out? Why isn't he going to keep playing?" She asked. Here she was complaining that "the big fat cheater" was coming out.

When Lewis comes in, you can hear the televisions around the Bay Area turning off.


Selfish reason #4: I love hearing the KNBR promos leading up to home run #756. They play the theme from The Natural while replaying clips of Bonds home runs. In light of what we now know, I think "The Natural" might be the wrong label for Barry.

Selfish reason #5: I like the idea of Bud Selig dragging his tired colluding ass across the country.

And finally
Selfish reason #6: Why else would you watch a Giants game this year?

I mean other than seeing how they'll blow another Matt Cain lead or if Zito will lose again... what's the point?

After #756, the Giants will have lower ratings than the Yankeeography for Hideki Irabu.

So take your time, Barry. 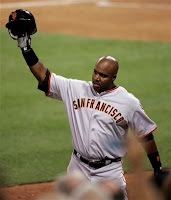