"In the Bedroom" shows how sick we Red Sox fans are 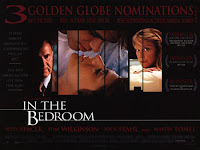 The film is a gut wrenching drama that takes place in Maine. At one point the main character, played by Tom Wilkinson is in a car and holding a gun to his son's murderer, played by William Mapother.

It's a tension filled scene that the movie has been building up to and we aren't sure if he is going to kill him for revenge or make him leave the country.

During the tension filled drive the father says "Keep driving... and put the game on." The guy turns on the radio and it is the Red Sox game.

Even at this point of paternal vengeance, he needed to know the score.

And, like everything else in that Oscar nominated film, it rang 100% true.

We are sick people
We need help