Am I in a parallel universe?

I must be!
That is the only explanation for the e mails I've been getting about the "fading Red Sox."

I guess in a parallel universe it is.

And they have been taking advantage of a REAL fading team. 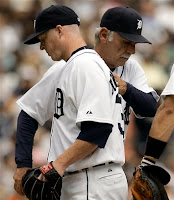 The Defending American League Champion Detroit Tigers.
How bad has it been for Detroit?
They've lost 11 out of their last 14, including getting getting blown out in their own building by the Devil Rays!

In fact there are a lot of teams falling apart in the pennant races.

The Brewers have lost 15 out of 22 games yet are still in first place because the Cubs lost 6 of their last 8 games!


The Dodgers went from first place (and a WALTZ to the World Series) all the way to 4th place by losing 13 out of 16 games.

Folks... doesn't anyone want to go to the playoffs?

For Godsake, the Cardinals are sneaking back into it! So are the Twins! And the Rockies!

Do we want a Twins/Rockies World Series????

There are a lot of teams fading...
And playing a lot worse than a .650 clip like the Red Sox have been doing.

But I guess in a parallel universe, that's considered fading.

Which brings me to another question:
In that parallel universe, does Roger Clemens have a good singing voice?
That would explain this Zest commercial.
Listen to the Rocket's pipes!