Putting the GAG in Gagne 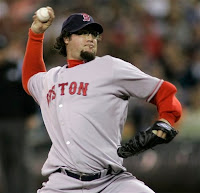 Well, I have to be fair... I wanted Eric Gagne here and I thought it was a good trade.

And who knows? If he gets a few big outs in October, nobody will remember this weekend. And lest we forget some players have had lousy regular seasons only to come up big for a World Champion in October (David Weathers and Graeme Lloyd with the 1996 Yankees come to mind)

But this weekend was INEXCUSABLE!

This should have been a 3 game sweep!
A 5-1 lead in the 8th on Friday? As I said before, that hurt.
A 3-1 lead today? And Gagne blows the lead again? The guy almost has as many earned runs in 2 weeks with the Red Sox as he had in 4 months with the Rangers.

The lead should be at 6... instead of 4. (Thanks for the effort, Cleveland, but that will be another post.)

And now I've been sucked into the parallel universe and I have to say "OK, it's now a race."
Posted by Sully at 2:37 PM