So the Tigers and Yankees were delayed 4 hours by rain on a Friday. The Yankees will be in Detroit on Saturday and Sunday, so lots of opportunity to reschedule the game as a double header.

So naturally what happened?
They played the game last night! First pitch at 11PM.
I heard on XM that baseball wants to avoid double headers.

Um... OK. So it makes sense to play a Yankee/Tiger game where you eliminate the New York and Detroit television markets?

You play a game wayyyy past Roger Clemens bed time?

It served them right that it was an extra inning game. I was hoping it would go 19 innings and they'd be playing at dawn.

When Carlos Guillen homered to end the game, it was 3:30 AM. Always a good time to have a lot of people loaded on beer to drive home in Detroit.

How is that better than a double header?

Here's a good rule to live by:
If you are going to start something at 11PM, and it doesn't involve someone dressed as Dr. Frank N Furter and a live performance of "Let's Do The Time Warp Again"... then postpone it until the next day. 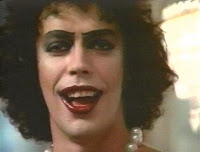