Congrats on the job, Dave. I think you need some pitching 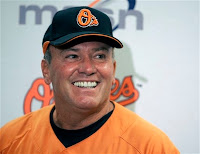 Dave Trembley was signed on to be the Orioles manager through 2008 today... and his team rewarded him by taking the biggest ass whuppin' since the 19th century.

And get your arms loose, boys! It's only game one of a double header.

The game has only been over for about 20 minutes, but I have some initial thoughts:

1. It's the biggest ass whuppin since Chicago beat Louisville... in 1897
The American League didn't exist yet.
Amelia Earhart and George Gershwin weren't born yet.
Brahams was still alive.
That's a HISTORICAL asswhuppin'

2. It was the first game of a double header which means several starters, including Sammy Sosa, Gerald Laird and Brad Wilkerson were resting for game 2. I wonder if there was any pressure on them to top the game 1 score.

3. The Orioles were up 3-0, so technically this was a "Come from behind" win. A genuine nailbiter. 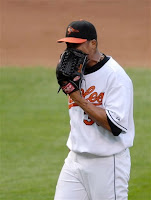 4. It was quite a day for players picked up at trade deadline deals for the Rangers. Jarrod Saltalamacchia (and yes, I looked up how to spell that name) who was picked up in the Teixeria trade, went 4-6 with 2 homers, 5 runs scored and 7 runs batted in. Former Red Sox David Murphy went 5 for 7 and raised his average to .550. (I am predicting it will go down.) Kason Gabbard, also picked from the Red Sox for Gagne, got the win. Safe to say, he enjoyed his run support.

5. If you can believe it, someone got a save for this game! Wes Littleton pitched the last 3 innings, which does indeed qualify as a save. Not exactly a pressure packed save you'd have to admit. I'm sure he wasn't quaking on the mound in the 9th thinking "I got to hold these guys to 26 runs!"

7. The Good teammate award goes to Paul Shuey. The one time second overall draft pick who never became the star the Indians were expecting, pitched the last two innings, saving the bullpen for the nightcap. His ERA wasn't exactly sparkling going into yesterday's game (6.75). That was before he let up 9 runs in two innings pitched. Now it is at 9.49. When your ERA in August jumps by nearly 3 runs in one night, you had better demand a round of drinks from your teammates.

8. What could Ranger manager Ron Washington POSSIBLY say to his team to keep them pumped up? "Come on guys! It's only a 27 run lead! Don't let them back into this?"

9. What could Trembley say to the Orioles between games? "Alright guys, it's just a loss. Brush it off, and try not to beat in a manner that hasn't been seen since before the Spanish American War!"

10. There is no pressure AT ALL on Garrett Olson, the Orioles pitcher in the nightcap. Just hold the Rangers to under 30 and he'll have the best pitch game of the night!