Have you ever heard of Travis Metcalf?
Me neither, and I follow baseball pretty closely.

Evidently he is a part time rookie third baseman for the Rangers.
And going into today's double header, he wasn't exactly a candidate for Rookie of the Year.

Well in the insane 30 run thrashing, he hit an 8th inning grand slam off of Orioles pinata Rob Bell, doubling his career total to 2.

In the nightcap, where the Orioles held the Rangers to a mere 9 runs, Metcalf went 2 for 3, driving in 2 runs in the second on a double, a run on a sac fly in the fourth and then tied the game in the 8th and scored in the winning rally.

How remarkable a jump in one day's stats is that?
In order to put that in perspective, for Alex Rodriguez to have his average spike by 20 points in one day, his home run totals double and RBIs increase the same rate as Metcalf... 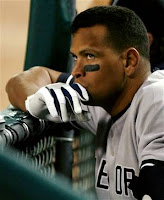 Impressive numbers... but against the Orioles today? Quite possible.
Maybe I should pick up Travis for my fantasy team.
Posted by Sully at 11:27 PM